Several parts of the country get flooded during monsoon season every year. In fact, India lost 2,231 lives due to cyclonic storms/heavy rains/floods/landslides during 2017/18.

The situation in severely damaged state of Kerala saw some improvement on Monday as water receded in some areas. However, 370 lives have already been lost and 7, 24,649 people have been evacuated to 5,645 camps so far, due to floods. The Indian Meteorological Department expects heavy rainfall in Kozhikode, Kannur and Idukki districts over the next four days.

India's battle with floods and heavy rains is not new. The monsoons are the most awaited season for the agrarian community as India gets 70 per cent of its annual rainfall between June and September, which also affects the yield of kharif crops. But several parts of the country get flooded during monsoon season every year. In fact, India lost 2,231 lives due to cyclonic storms/heavy rains/floods/landslides during 2017/18. In Bihar, 649 lives were lost, the highest during the year. This was followed by Gujarat and West Bengal, which saw 229 and 197 deaths due to natural calamities during the period. Kerala was among the seven states, which saw a loss of over 100 lives, 119 to be precise, during the year 2017/18. 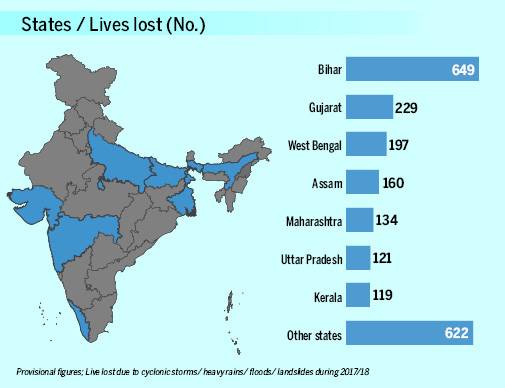 The Kerala floods have caused an estimated damage of around $3 billion and the number is expected to go up. Over the years, the normal to above average rains has brought flood like situations in various parts of the country damaging crops, houses, public utilities apart from taking human lives. The total damages due to floods or heavy rains more than doubled from Rs 5675.3 crore in 2016 to Rs 18859.4 crore in 2017. Till date, the maximum damages of crops, houses and public utilities were registered in 2015 of Rs 57291.1 crore. A massive flood was reported in 2015 that affected Tamil Nadu. The flood was caused due to heavy rainfall generated by the annual northeast monsoon in November-December 2015.