Aarey forests protests: Activists have claimed that almost 200 trees have been cut so far. They have also alleged that the Mumbai metro corporation wants to finish the job before October 10, when the matter goes to the National Green Tribunal. 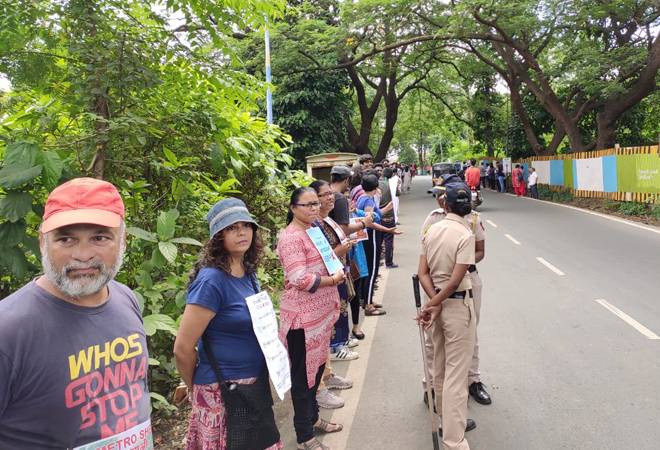 Hundreds of environment activists flocked to Aarey on Saturday morning to stop the felling of trees in order to make way for the Mumbai metro. The entire Aarey Colony was cordoned off by Mumbai police and Section 144 has been imposed in the area. While 38 protesters were booked under various sections of the IPC since Friday night, at least 60 others were detained, police said. Shiv Sena leader Priyanka Chaturvedi, who took part in the protest, was also taken into custody.

The Mumbai Metro Rail Corporation started cutting trees late Friday to make way for a car shed. The chopping of trees came after the Bombay High Court dismissed four petitions filed by NGOs and activists protesting against the chopping of trees at the Aarey forest.

"There is a heavy police deployment in the area. No one is allowed to enter Aarey Colony. Even tourists are being stopped," an activist said.

Activists have claimed that almost 200 trees have been cut so far. They have also alleged that the metro corporation wants to finish the job before October 10, when the matter goes to the National Green Tribunal.

"This matter is going to be heard by the NGT on October 10, and we hope to get some respite from there. But it seems like the authorities want to eliminate the entire green patch before the hearing," Stalin D, one of the activists, said.

Mumbai: Entry into #Aarey from Marol Maroshi Road restricted after Section 144 has been imposed in the area. #AareyForestpic.twitter.com/4sAaqbjLOX

Meanwhile, Shiva Sena leader Aaditya Thackeray, who is contesting the October 21 assembly election from Worli, extended his support to the protesters.

"A project that should be executed with pride, the Metro 3, Mumbai Metro 3 has to do it in the cover of the night, with shame, slyness and heavy cop cover. The project supposed to get Mumbai clean air, is hacking down a forest with a leopard, rusty spotted cat and more," he tweeted.

Aam Aadmi Party spokesperson Preeti Sharma Menon said cutting the trees was "a violation of the model code of conduct".

"The order was uploaded by the Brihanmumbai Municipal Corporation only today, so it is deemed as an order today. They can't issue such orders when the code of conduct is in place," she told PTI.