Ambanis are now twice as rich as Asia's second-richest family

The cumulative wealth among the top 20 richest families in Asia amounts to $463 billion, with the Ambanis holding about 16% of that amount Reliance chief Mukesh Ambani and his family are more than twice as rich as Asia's second-richest family, according to a report that compares the wealth of Asia's 20 richest families.

While globally many companies and business empires have faced the brunt of the pandemic and incurred serious damages, the Ambanis stood their ground and remained Asia's richest family.

The rankings suggest that the Ambani family is the richest in Asia and twice as wealthy as Asia's second-richest - the Kwoks of Hong Kong. The Ambanis also hold triple the wealth of South Korea's prominent Lee family, as well as being  five times wealthier than Japan's Torii and Saji clan, according to the Bloomberg Billionaires Index ranking of 20 richest dynasties in Asia.

The rankings do not include entrepreneurs/first-generation wealth creators; families from mainland China, where businesses are relatively young and based on technological progress. Jack Ma, the founder of Alibaba Group and Pony Ma, the founder of Tencent do not find a place in the list.

Mukesh Ambani finds himself in the second generation of the family, while the company has introduced the third generation in the form of his twin children joining the subsidiaries of Reliance. His cumulative wealth of $76 billion has jumped by more than $25 billion since the rankings in 2019 came out. Contrastingly, others in the top 20 richest Asian families gave gained about $10 billion in the same period.

The increase in wealth falls in line with the 63-year-old Ambani attempting to expand his business from a refinery-led conglomerate to a technology-driven empire. Earlier this year, he had roped in investors to raise capital for Reliance's Jio Platforms, subsequently also raising funds for its retail arm, Reliance Retail Ventures Limited (RRVL).

Following the Ambanis is the three-generation family of the Kwoks from Hong Kong with $33 billion; the Chearavanont family from Thailand with $31.7 billion; and the Hartono family from Indonesia is placed fourth with a net worth of $31.3 billion. 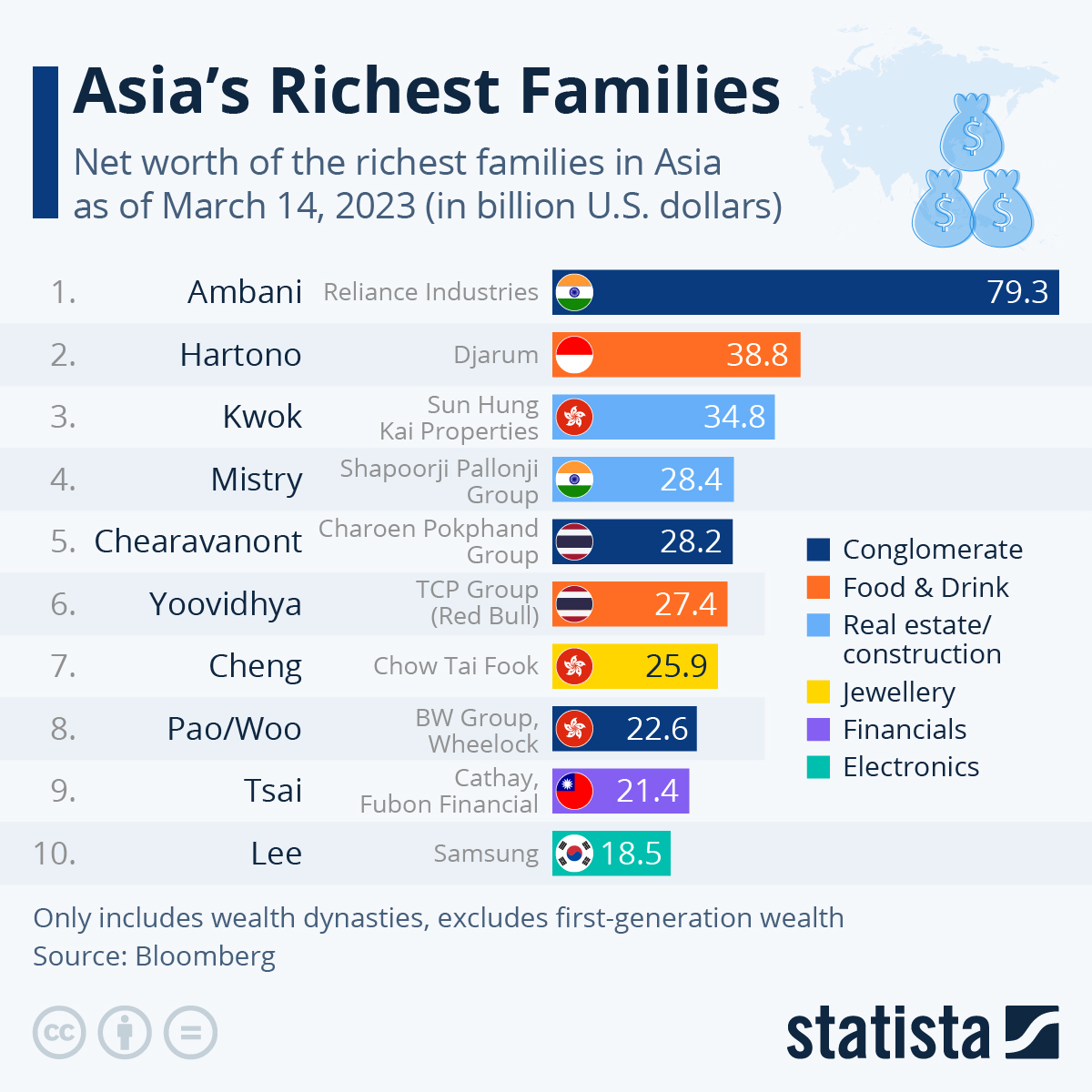 There were two more Indian families that featured in the top 20 list: the fifth-generation Mistry family at 8th, and the Hinduja family occupying the 16th spot. The former family runs the Shapoorji Pallonji Group and holds wealth amounting to $22.0 billion, while the Hinduja family's net worth is $15.1 billion.

The cumulative wealth among the top 20 richest families in Asia amounts to $463 billion, with the Ambanis holding about 16% of that amount.