Enjoy Enjaami was released on March 5 and has already crossed 34 million views on YouTube (At the time of publishing this story). Dhee and rapper Arivu have provided the vocals for the song Enjoy Enjaami. 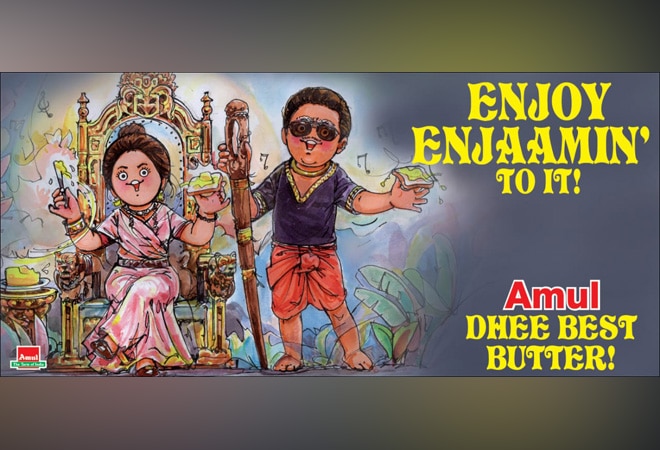 India's leading dairy brand Amul on March 19 released a doodle to celebrate Santhosh Narayanan's Tamil song Enjoy Enjaami. Amul is known for creating doodles on trending topics and this time it has done so for a song that is grabbing eyeballs online.

The song which was released on March 5 has already crossed 34 million views on YouTube (At the time of publishing this story). Dhee and rapper Arivu have provided the vocals for the song Enjoy Enjaami. Santhosh Narayanan has produced the song and the lyrics have been written by Arivu.

Amul has used the song's title and the singer's name to come up with pun for the doodle.

The words "Enjoy Enjaamin' to it' are plastered on the doodle, this is clearly a pun based on the song's title. Below the Amul logo are the words "Dhee Best Butter" which is obviously a play on singer Dhee's name.

Amul shared the doodle on Twitter and wrote, "#Amul Topical: Latest Tamil song that's a massive hit, has youngsters grooving to it! (sic)."

Enjoy Enjaami is the first independent song that has come out of AR Rahman's Majja platform. The Majja platform is for independent artists. Apart from YouTube, the song was also released on other music platforms and is performing well. The song is about environmental issues, the struggles of landless labourers and the love for nature.