Pictures of Revana Siddappa, an old man who sells plants at Kanakapura road near Sarakki Signal in Karnataka, became viral soon after a user shared details about him on Twitter 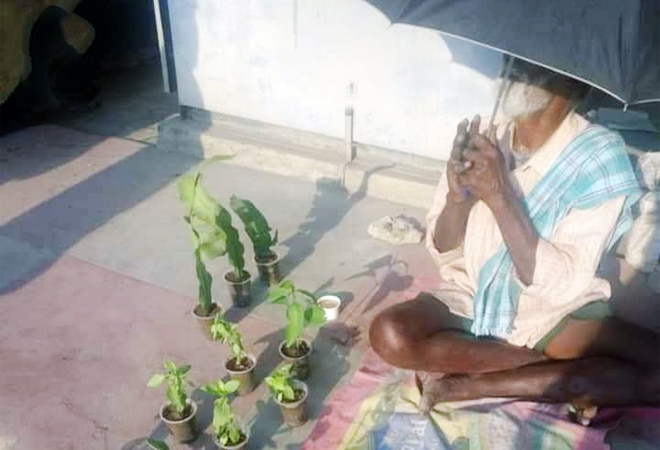 Meet Revana Siddappa, an old man, who sells plants at Kanakapura road near Sarakki Signal, Karnataka. Price of these plants are from Rs 10-30

On one hand he hold umbrella to save himself from sunlight

Actor R Madhawan also shared the tweet, asking people to support him. People from Changemakers of Kanakapura Road soon reached the spot and gifted the elderly man a canopy to protect him from the heat. "Today we provided a canopy and some more plants for him to sell. We will be providing a chair and a table as well! We are raising funds to make sustainable income. Anyone can directly reach out to us! (sic)," they said. The old man was later provided with a chair and a table as well.

Hooda thanked the Changemakers of Kanakapura Road saying "you guys are the real heroes". Recently, Twitterari had come together to help an elderly couple running a small eatery called Baba Ka Dhaba in Delhi. A user named Vasundhara Tankha Sharma had posted a heartbreaking video by a food blogger. Sharma tweeted, "This video completely broke my heart. Dilli walon please please go eat at Baba ka Dhaba in Malviya Nagar if you get a chance. #Support Local."

When asked what he has earned since morning, he breaks into tears and produces Rs 10 note from a box. The video went viral and celebs like Swara Basker and Nimrat Kaur also voiced their support for the 80-year old couple. Several people also thronged the place to have food.