Catch the top stories from the world of business and economy with BusinessToday.In's end of day report 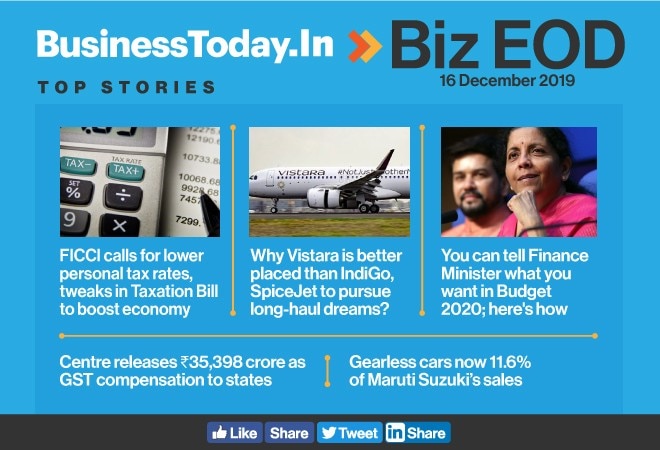 FICCI calls for lower personal tax rates and better use of corporate rate tax cut in its budget memorandum for financial year 2020-21. Vistara is looking at better chances than its rivals in terms of long-haul routes. Centre disburses 35,398 crore pending GST compensation to states. Read for more top stories from the world of business and economy:

The industry body also wants the government to reintroduce the classical tax system of dividend taxation in the hands of the shareholders with protection for small shareholders.

Vistara waited for 20 aircraft in its fleet - a rule mandated by authorities to fly international - before it could launch its first international flight to Singapore in August this year.

3. You can tell Finance Minister what you want in Budget 2020; here's how

The Finance Ministry, which began the pre-budget consultation for 2020-21 on Monday, has sought ideas and suggestions to make the 'Union Budget-making process participative and inclusive'.

States haven't received compensation for loss of revenue from implementation of GST since August. In the current fiscal, the government has already collected cess of Rs 55,467 crore till October 31, 2019.

More than 5 lakh automatic cars produced by Maruti Suzuki India come with the auto gear shift technology, which was launched with the company's Celerio hatchback in 2014.