Rhea Chakraborty will need to submit her passport and Rs 1 lakh bond to get bail. NCB had arrested Rhea in connection with a drugs case related to Sushant Singh Rajput death case on September 9 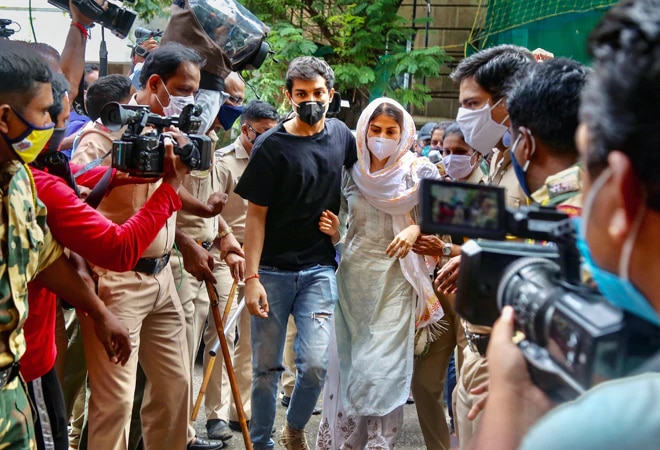 The Bombay High Court has granted bail to Bollywood actor Rhea Chakraborty, while the bail plea of her brother Showik Chakraborty has been rejected. The Narcotics Control Bureau had arrested Rhea and Showik in connection with a drugs case related to Sushant Singh Rajput death case.

Narcotics Control Bureau had arrested them in connection with a drugs case related to #SushantSinghRajput death pic.twitter.com/FqhCS7UzGy

Samuel Miranda and Dipesh Sawant were also granted bail by the Bombay High Court on Wednesday. The court, however, rejected Abdul Basit's bail plea. All of them were arrested by the NCB in the drugs connection case in the past one month.

Rhea will need to submit her passport and Rs 1 lakh bond to get the bail in SSR drug case. The actor will also need to seek permission before going out of Mumbai. "We are delighted by the order of the honourable Bombay High Court for granting bail to Rhea Chakraborty. Truth and justice have prevailed and ultimately the submissions on facts and law have been accepted by Justice Sarang V Kotwal," Rhea Chakraborty's lawyer, Satish Maneshinde said, reported IndiaToday.In.

He termed Rhea's arrest and custody "totally unwarranted and beyond the reach of law". "The hounding and witch hunt by three central agencies - the CBI, ED and NCB - of Rhea should come to an end. We remain committed to truth. Satya Meva Jayate," he added.

The Narcotic Drugs and Psychotropic Substances Act court had yesterday extended the judicial custody of Rhea and her brother till October 20. Moreover, 18 others have been arrested in the case so far.

Rhea was arrested on September 9 over the charge of procuring banned drugs for her boyfriend and late actor Sushant. The siblings have been in jail for nearly a month on drugs-related charges linked to the Sushant Sigh Rajput's death case.

In the SSR suicide case, the AIIMS panel, who re-evaluated Sushant Singh Rajput's post-mortem and viscera reports, said the actor's death was a case of suicide, and the murder angle has been completely ruled out.

Sushant Singh Rajput, 34, was found dead in his Mumbai apartment on June 14. The Mumbai police launched a suicide probe but weeks after the actor's family appealed to the Supreme Court to allow CBI to resolve the case.

The NCB is probing the drug angle in this case under criminal sections of the NDPS Act after the Enforcement Directorate (ED) shared with it a report following the cloning of two mobile phones of Rhea.

Various angles surrounding the death of Rajput are being probed by the NCB, ED, and the Central Bureau of Investigation (CBI). During the NCB's probe, WhatsApp chats retrieved from Rhea's phone revealed conversations involving drugs.