Chandrayaan 2 landing: While the lander and rover would perform in-situ measurements near their landing site, the Orbiter will conduct remote-sensing observations from a 100 km orbit 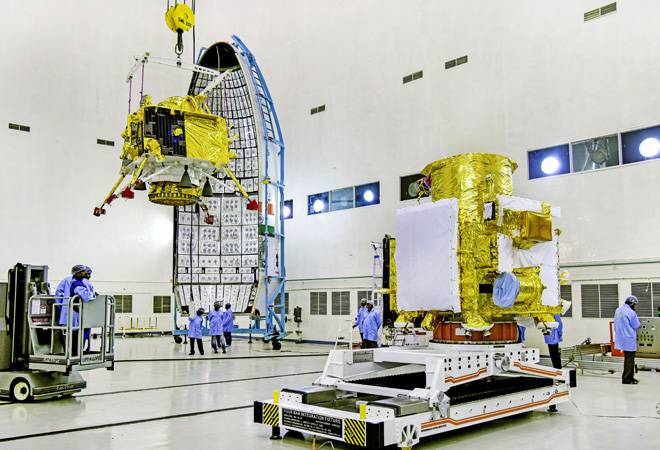 Chandrayaan 2 landing: Lander Vikram and rover Pragyan would collect crucial data to offer insight into origin and evolution of the Moon.

Chandrayaan 2 landing: In a few hours from now, Chandrayaan 2 would begin its final descent to the Moon. A week ago, lander Vikram had detached from the Orbiter and is now moving towards the Moon with rover Pragyan. After getting in position, the lander will try to soft land on the lunar South Pole, following which the rover will roll out to study the Moon's terrain.

Several science payloads on Chandrayaan 2 are meant to offer insight into origin and evolution of the Moon through detailed study of topography, seismography, mineral identification and distribution, surface chemical composition, thermo-physical characteristics of top soil and composition of the tenuous lunar atmosphere.

Here's a look at what the orbiter, lander and rover would do during their time on and around the Moon:

ALSO READ:Chandrayaan-2: How will Pragyan rover land on Moon's surface

The Orbiter, which would remain functional for of one year, is responsible for mapping the lunar surface from orbit, scan for minerals, and study the lunar atmosphere, among other things. The Orbiter will also assist lander Vikram to safely land on the Lunar South Pole.

The Oribiter is also carrying a Dual Frequency Synthetic Aperture Radar (DFSAR) which will assist in high-resolution lunar mapping of the lunar polar regions, quantitative estimation of water-ice in the polar regions, and estimation of regolith thickness and its distribution.

Moreover, the Orbiter will continue the CHACE experiment carried out by Chandrayaan 1 using the Chandrayaan 2 Atmospheric Compositional Explorer 2 (CHACE 2). CHACE 2's primary objective is to carry out an in-situ study of the composition and distribution of the lunar neutral exosphere and its variability.

It will also conduct Dual Frequency Radio Science (DFRS) experiment to study the temporal evolution of electron density in the lunar ionosphere.

The Lander Vikram, which is responsible for delivering rover Pragyan to the Moon's South Pole, is carrying three payloads - RAMBHA, ChaSTE and ILSA.

The Radio Anatomy of Moon Bound Hypersensitive ionosphere and Atmosphere, or RAMBHA, will gain information in a highly dynamic plasma environment and measure factors such as ambient electron density/temperature near the lunar surface as well as temporal evolution of lunar plasma density for the first time near the surface under varying solar conditions.

Chandra's Surface Thermo-physical Experiment, or ChaSTE, will measure the vertical temperature gradient and thermal conductivity of the lunar surface. It consists of a thermal probe (sensors and a heater) that is inserted into the lunar regolith down to a depth of 10 cm, as mentioned by ISRO.

Instrument for Lunar Seismic Activity (ILSA) is a triple axis, MEMS-based seismometer that can detect minute ground displacement, velocity, or acceleration caused by lunar quakes. Its primary objective is to characterise the seismicity around the landing site, as stated by the space agency.

ALSO READ:Chandrayaan-2: How India's Moon mission differs from the ones by other countries

Once lander Vikram lands on the Moon's South Pole, rover Pragyan will venture out to study the surface around the landing site using its two payloads - Alpha Particle X-ray Spectrometer (APXS) and Laser Induced Breakdown Spectroscope (LIBS). Data collected by Pragyan will be crucial in understanding the origin and evolution of the Moon.

APXS will try to determine the elemental composition of the Moon's surface near the landing site. This payload will use X-ray fluorescence spectroscopy technique for this, where X-ray or alpha particles are used to excite the surface. APXS uses radioactive Curium (244) metal that emits high-energy, alpha particles - as well as X-rays - enabling both X-ray emission spectroscopy and X-ray fluorescence spectroscopy. Through these techniques, APXS can detect all major rock-forming elements such as Sodium, Magnesium, Aluminium, Silica, Calcium, Titanium, Iron, and some trace elements such as Strontium, Yttrium and Zirconium.

LIBS will identify and determine the abundance of elements near the landing site. It will fire high-powered laser pulses at various locations and analysing the radiation emitted by the decaying plasma.