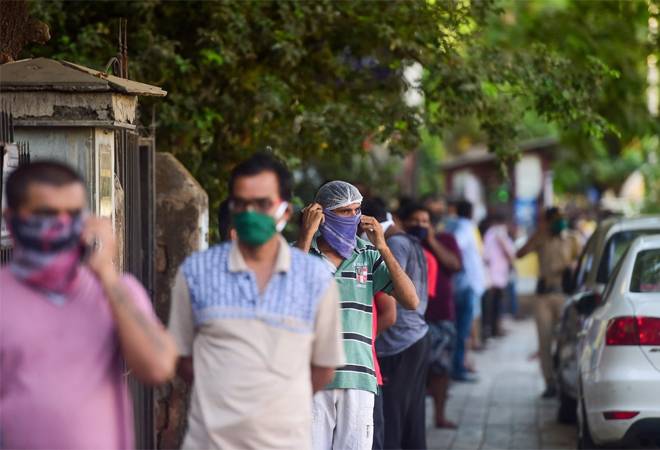 The government said a record-high number of 1,074 patients recovered from the deadly virus infection in the last 24 hours but cautioned the restrictions could be reimposed if there was complacency in following social distancing norms. India's total confirmed COVID-19 cases stand at 42,836, including 29,685 active cases, 11,761 cured/discharged, 1 migrated and 1,389 deaths as of May 4, 9 PM.

While the nationwide tally of confirmed COVID-19 cases crossed 44,000 with more than 1,400 deaths, the number of recoveries also neared the 12,000-mark, as per numbers announced by various states and union territories.

In various districts, scores of people could be seen standing in long queues outside liquor shops, flouting the social distancing norms.

Many government-run liquor shops in the national capital had to be closed within a just few hours as crowds swarmed shops. Taking this into consideration, the Delhi government has now imposed  70 per cent 'Special Corona Fee' on MRP of liquor bottles. Karnataka also recorded Rs 45 crore worth liquor sale on Day 1 of the reopening of alcohol shops.

Chhattisgarh Health Minister TS Singh Deo also objected to the Centre's order of opening the liquor shops. He said the administration would be in fault if people would flout lockdown norms. "The Centre should not allow opening of liquor shops in these times. The decision should be reconsidered."

Kerala, which has the highest per capita consumption of liquor in the country, has decided to shut state's liquor outlets during the lockdown. Kerala did not report a single new case for the second consecutive day, but neighbouring Tamil Nadu saw its tally rising by a record number of 527 new cases. Gujarat, Maharashtra and Delhi also reported significant rise in their numbers.

Coronavirus: Indians stranded in UAE to be evacuated on May 7; 2 lakh people register