Coronavirus lockdown: Booze lovers thronged the liquor stores many hours before the shutters went up. Some came ready with umbrellas, raincoats, newspapers and books and queued up as early as 3 am 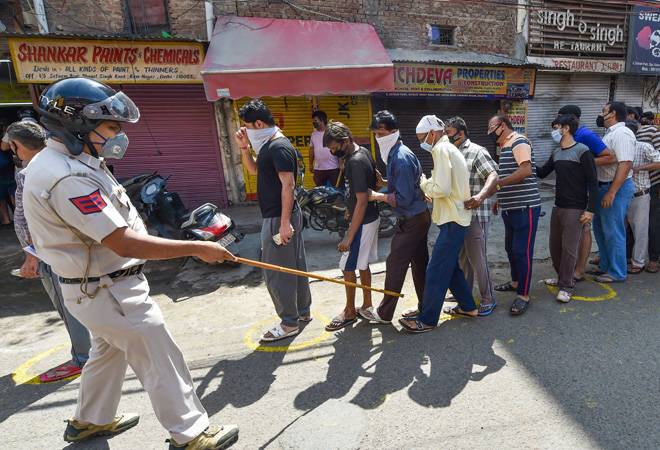 A municipality worker sanitises an area near a wine shop after authorities allowed sale of liquor with certain restrictions, during ongoing COVID-19 nationwide lockdown at Chander Nagar.

Social distancing went for a toss on Monday as people queued up outside liquor shops in several cities and towns after partial relaxation in the lockdown rules across the country.

Multitude scenes of chaos were witnessed outside the government-run shops in New Delhi, Mumbai, Bengaluru, Lucknow and other cities.

Booze lovers thronged the liquor stores many hours before the shutters went up. Some came ready with umbrellas, raincoats, newspapers and books and queued up as early as 3 am.  In Karnataka's Belagavi, eager buyers marked their spot on Sunday night itself, leaving slippers, bags and stones in "social distancing rings".

About 4,500 standalone liquor outlets outside containment zones opened from Monday in the state with partial restrictions.

In border districts like Chittoor, SPS Nellore, East Godavari and Krishna, tipplers from neighbouring Tamil Nadu and Telangana joined the long queues. The crowd was so heavy that at a couple of places sales were suspended to maintain order. There were similar scenes in Juhu where police tried to control the restless crowd. To the dismay of customers, many liquor vendors in Maharashtra remained shut.

A large number of people made a beeline outside liquor shops in Uttar Pradesh that reopened 26,000 such stores. Rajasthan had to close most shops since social distancing norms were not followed.

Meanwhile, Delhi government imposed "Special Corona Fees" of 70 per cent on the MRP of liquor after people flouted social-distancing norms in front of liquor outlets.

Standalone liquor shops reopened in West Bengal, but the police closed down many within an hour as people started jostling with each other in front of the outlets.

Some states like Kerala and Madhya Pradesh kept liquor shops closed. They were closed in Puducherry too. Tamil Nadu government has announced the resumption of liquor sales from May 7.

According to All India Brewers' Association (AIBA) Director General Shobhan Roy, the liquor industry contributes around Rs 2.5 lakh crore to the exchequers of the state government.

Also read: Coronavirus: Indians stranded in UAE to be evacuated on May 7; 2 lakh people register