Cyclone Amphan updates: The strong winds and rain could continue today as well in West Bengal, say weather experts. The turbulence could extend to Assam and Meghalaya, triggering heavy to very heavy rainfall. The cyclonic storm will get weaker while crossing over Nadia and Murshidabad in West Bengal later tonight before entering Bangladesh 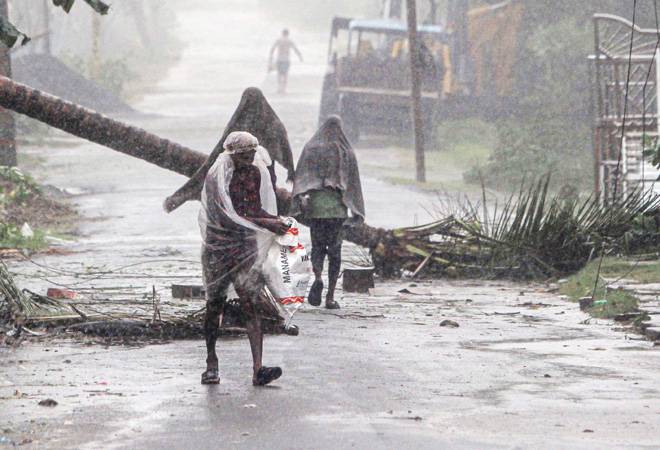 Super cyclone Amphan made a landfall in India around 7 pm on Wednesday. The extremely severe cyclone has battered West Bengal and Odisha, packing winds gushing up to 190 kmph, causing heavy rainfall, uprooting trees and swamping homes and farmlands. The cyclone Amphan has reportedly taken away 12 lives. The strong winds and rain could continue today as well in West Bengal, say weather experts. The turbulence could extend to Assam and Meghalaya, triggering heavy to very heavy rainfall. The cyclonic storm will get weaker while crossing over Nadia and Murshidabad in West Bengal later tonight before entering Bangladesh.

Check out all the latest updates on cyclone Amphan on BusinessToday.In live blog

11:40AM: 1.9 crore children at risk from cyclone Amphan in India, Bangladesh, says UNICEF

The United Nations' children agency has warned that at least 1.9 crore children in parts of Bangladesh and India were at 'imminent risk' from flooding and heavy rains as cyclone Amphan makes landfall.

West Bengal, home to more than 5 crore people, including over 1.6 crore children, is expected to take a direct hit from the powerful storm, UNICEF said.

11:30AM: Normalcy returns to Odisha's Balasore

In Odisha's Balasore district, on Thursday, normalcy has returned after cyclone Amphan moved away from the area. After two days, vegetable vendors opened their shops. Cyclone Amphan made a landfall in Odisha on May 20.

Thinking of Bengal and Odisha ..
Terrifying visuals on TV . May all stay safe .

Actor Vicky Kaushal wrote, "Praying for the safety and well being of everyone residing in the regions affected by the cyclone".

Seeing some terrifying videos coming in from Kolkata. Praying for the safety and well being of everyone residing in the regions affected by the cyclone. 🙏🏽

At least seven persons, including a six-year-old boy, were killed as a cyclone Amphan battered Bangladesh on Thursday. The six-year-old boy died after being hit by a falling tree branch.

Many low-lying areas were inundated, embankments collapsed, trees uprooted  in the coastal districts of Bangladesh.

Over 10 lakh people in the coastal areas of Bangladesh were without power after strong winds snapped electricity lines.Apart from this, almost 40,000 customers of West Zone Power Distribution Company have lost electricity supply.

Cyclone Amphan started crossing the Bangladesh coast around 5pm on Wednesday packing a wind speed of around 160 to 180kph rising to 200kph within 80km of its centre.

Some 740 houses in Patuakhali were washed away as an advanced surge of tidal wave cracked a coastal embankment while Amphanwas approaching.

The Bangladesh Army, Navy and Air Force have made preparations to tackle the super cyclone.

West Bengal Chief Minister Mamata Banerjee, who has been monitoring the situation at state secretariat Nabanna since Tuesday night, said the impact of Amphan was "worse than coronavirus". Amphan has killed at least 12 persons, and left behind a trail of destruction by uprooting trees, destroying thousands of homes and swamping low-lying areas of the state. Strong winds with speed up to 125 kmph per hour upturned cars in Kolkata and felled trees and electricity poles blocking roads and intersections. The mobile and internet services were also down as the cyclone had damaged several communication towers. There was a massive power cut in large parts of Kolkata, North 24 Paraganas and South Paraganas.

Here are some visuals of AMphans captured by netizens:

Glimpses of #Amphan: Bay of Bengal at #Digha today morning at 10.00 am #AmphanCyclone#CycloneAmphanpic.twitter.com/KQUpbsIU4a

Impact of #AmphanSuperCyclone bus is moving without a driver . Stay Safe everyone in West Bengal & Odisha.🙏 #CycloneAmphanUpdate#Amphan#Amphanlive#AmphanCyclon#CycloneAmphan#SuperCycloneAmphanpic.twitter.com/UElvOw5op5

10:00AM: M Venkaiah Naidu expresses anguish at the loss of lives due to cyclone Amphan

Vice President M Venkaiah Naidu on Thursday expressed anguish at the loss of lives due to cyclone Amphan. The Vice President appreciated state administrations of Odisha and West Bengal for timely evacuation of lakhs of people to safer places. He also praised WB and Odisha for ndertaking rescue and relief operations in coordination with the National Disaster Response Force (NDRF).

Amphan, the first tropical cyclone of the 2020 season in the North Indian basin, made landfall on Wednesday. The powerful storm slammed ashore near the border ofeaster India nd Bangladesh, delivering substantial storm surge to coastal areas.

Deeply anguished by the loss of lives and devastation caused to crops and public & private properties by #Amphan cyclone in West Bengal and Odisha.

9:50AM: All need to come forward for massive relief work: WB Governor

West Bengal Governor, on Thursday, tweted about how super cyclone has battered West Bengal. He said that he was "distressed at the loss of lives and property". Dhankar called Amphan "worst since decades". The West Bengal governor urged the everyone to come forwards for relief work.

Am distressed at the loss of lives and property #Amphan. Was in constant touch with agencies for last few days. Their commitment has minimised damage.

It has left behind a trail of destruction. Worst since decades. All need to come forward for massive relief work. pic.twitter.com/X0Ep0D5geD

9:40AM: Woman gives birth at fire department amid Amphas

A pregnant woman delivered a baby in the vehicle of fire services personnel while she was being shifted to hospital in Mahakalapada area of Kendrapara district this morning. Odisha Chief Minister Naveen Patnaik appreciated fire department for helping the woman. Patnaik wrote on Twitter, "My sincere thanks to all the firefighters who saved the lives of the mother and baby through her sincere efforts. Wishing the newborn a bright future".

9:30AM: Images of how cyclone Amphan has caused damage in West Bengal:

West Bengal: Trees uprooted & waterlogging in several parts of Kolkata in wake of #CycloneAmphan. The cyclone is very likely to weaken into a deep depression during the next 3 hours as per India Meteorological Department (IMD). pic.twitter.com/f81DZw3a0W

9:15 AM:Amphan lay over Bangladesh at 5:30 AM today. To weakened into a deep depression during next 3 hours.