Delhi Police Commissioner Amulya Patnaik on Tuesday urged protesting police personnel to return to work and said they should behave like a disciplined force. 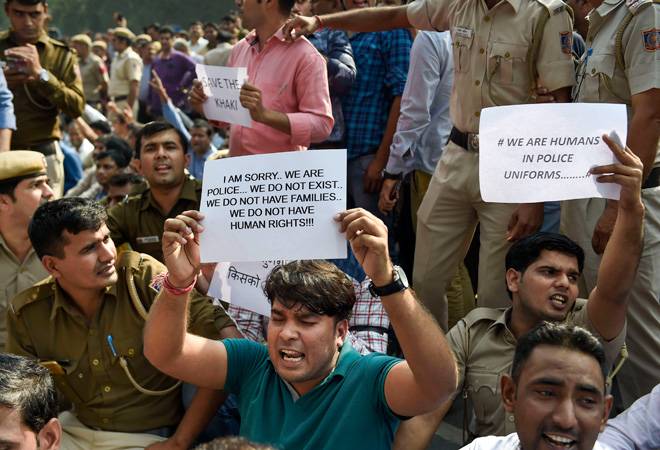 Delhi police protests: Agitated cops ask if they have no human rights

Agitated Delhi cops are protesting against a clash that broke out between police and lawyers at Tis Hazari Court on November 2. The police personnel have submitted a list of 10 demands, including the creation of a Police Protection Act.

News agency ANI, in a tweet, mentioned that a woman constable at the protest was saying she has felt scared ever since the Tis Hazari clash took place. "Once my police uniform used to motivate me to work but today I am too scared to walk out in this uniform," she said.

#WATCH Delhi Police personnel raise slogans of "Humara CP (Commissioner of Police) kaisa ho, Kiran Bedi jaisa ho" outside the Police Head Quarters (PHQ) in ITO. They are protesting against the clash that broke out between police & lawyers at Tis Hazari Court on 2nd November. pic.twitter.com/f4Cs7kx9Dr

The protest started on Monday morning, which led to heavy traffic from ITO towards Laxmi Nagar.  Police officials in uniform, were seen wearing black bands to condemn the attacks.

"Traffic Movement is closed in the carriageway from ITO towards Laxmi Nagar. Motorist are advised to use Delhi Gate & Raj Ghat," it stated.

Meanwhile, Delhi Police Commissioner Amulya Patnaik on Tuesday urged protesting police personnel to return to work and said they should behave like a "disciplined force".

What happened on November 2

On November 2, Saturday, an on-duty policeman was thrashed by advocates outside the Saket Court, the video of which has gone viral on the internet. In the video, some men were beating up a man in uniform on a bike. When the policeman was leaving the spot, a man could be seen hitting the bike with his helmet.

The lawyers alleged that members of their group were injured after police open-fired but police said shots were fired in the air to "ensure the safety of undertrials".

At least 20 policemen and eight lawyers were injured and 20 vehicles were vandalised on Novemebr 2 clash. The incidents drew sharp criticism from senior police officials who took to Twitter to register their discontent.

"I am sorry.. we are police ... we don't exist.. we don't have families...we don't have human rights!!!" said former Delhi Police PRO Madhur Verma, currently posted as Arunachal Pradesh's Deputy Inspector General (DIG). He was joined by former Delhi DCP Aslam Khan, now posted in Goa. Khan posted the video with a caption, "Khakhi going down to the worse".

The IPS Association also condemned the attack and expressed solidarity with colleagues subjected to "humiliation" and "assault".

Since then, tension between police personnel and lawyers has soared.

Union Minister Kiren Rijiju shared the video on Twitter saying, "Let's not take law into our hands. It's not question of supporting any group." Later, on the same day, clashes erupted in several parts of the national capital, in which many vehicles got vandalised.

Virat Kohli pens letter to 15-year-old self; asks him to savour his paranthas