With a following of nearly 67 million on Twitter, Trump's picture went viral within minutes of his post and was flooded with hilarious reactions with over 5 lakh likes and 1,61,000 retweets 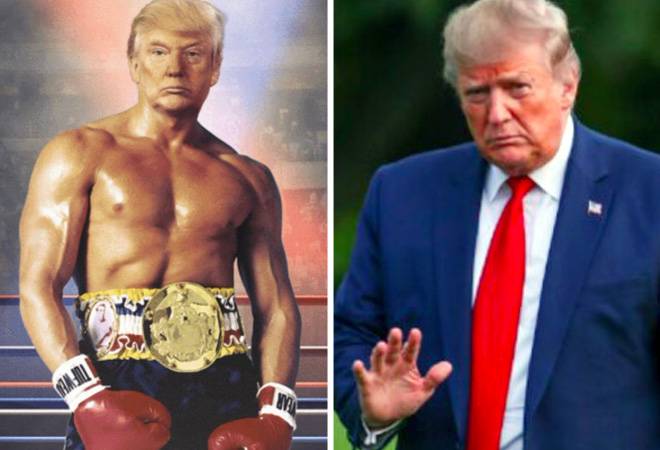 US president Donald Trump can be seen flaunting a

US President Donald Trump took to Twitter on Thursday to post an image of his face transposed on to the super-buff, bare body of the legendary movie character Rocky Balboa.

Trump tweeted the picture at 10.54 am without any photo caption. Soon after he posted the picture on the 34th anniversary of "Rocky IV" (which the ESPN cited in a tweet too before he sent out the image), the Twitterati went into overdrive with outpours of hilarious tweets mocking the 45th president of the United States (US).

The 73-year-old can be seen flaunting a "gorgeous chest" in the doctored picture of the legendary character played by Hollywood stalwart Sylvester Stallone. The picture was taken from the actor's 1982 boxing drama Rocky III.

With a following of nearly 67 million on Twitter, Trump's picture went viral within minutes of his post and was flooded with hilarious reactions with over 5 lakh likes and 1,61,000 retweets and likes as the netizens tried to decode the message behind it since it was shared without any image caption or text.

Also Read:Trump to celebrate Diwali for the 3rd time in White House on October 24

Here are some of the hysterical reactions on Trump's picture on Twitter:

How tRump and his followers see tRump

how the rest of the world sees tRump! pic.twitter.com/rvRBTAffLy

What you order from Wish.

What you got from Wish. pic.twitter.com/nIxN54qGiF