Dusu election result 2019: Akshit Dahiya of the ABVP defeated National Students Union of India (NSUI)'s Chetna Tyagi for the president post by a margin of over 19,000 votes. 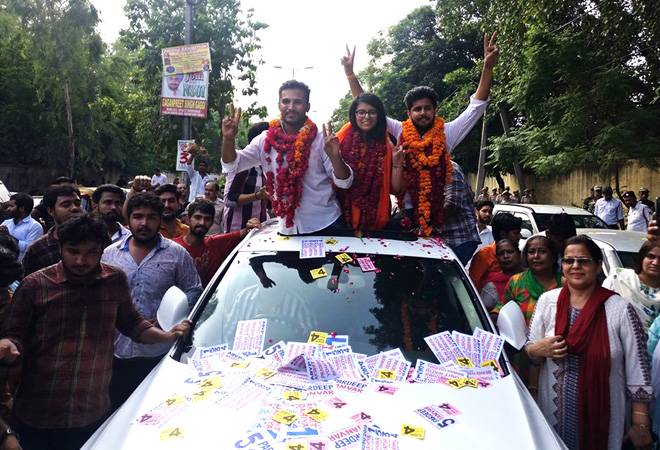 Akshit Dahiya of the ABVP defeated National Students Union of India (NSUI)'s Chetna Tyagi for the top post by a margin of over 19,000 votes.

The posts of vice president and joint secretary were won by ABVP's Pradeep Tanwar and Shivangi Kharwal by a margin of 8,574 and 2,914 votes respectively.

NSUI bagged the secretary's post with its candidate Ashish Lamba defeating ABVP's Yogi Rathee by a margin of 2,053 votes.

This year 16 candidates are in the fray for the DUSU elections. Out of them four are women, while two of them are contesting independently.

On Thursday, polling for the four posts ended amid allegations of EVM malfunctioning. The voter turnout in was recorded at 39.90 per cent yesterday. Over 1.3 lakh students were eligible to cast their vote. The counting for the DUSU polls, which was supposed to start at 8.30 am on Friday, began after almost a two-hour delay at around 10: 30 am due to technical glitch in the screens which shows live counting.

Last year, the ABVP had won three posts while the NSUI won one post.