He said there was a time when the SP came third among all political parties in the country. 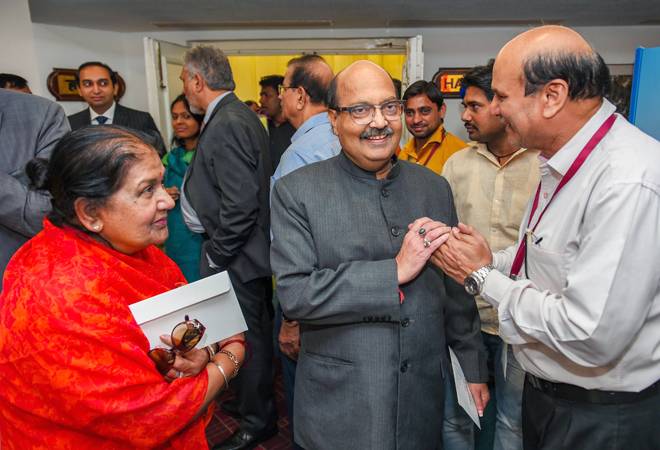 The SP-BSP-RLD alliance in Uttar Pradesh is like a group photograph of people who have come together to abuse Prime Minister Narendra Modi and will not manage more than seven of 80 seats in the state, says former Samajwadi Party leader Amar Singh.

The 'gathbandhan' of the three parties in Uttar Pradesh is afraid of Modi, Singh said, recalling an old Hindi film song "Sathi haath milana saathi re" (let's all join hands) to mock the alliance.

"As Modiji says, where is the gathbandhan (alliance)? They are afraid of Modiji and doing 'Saathi hath milana re'. Now where is Mamata (Banerjee)? Where is the Left and the Congress? Rahul (Gandhi) says Mamata or BJP are one and the same for Congress. This gathbandhan is a group photograph to abuse Modi," Singh said.

Asked about the alliance's electoral prospects in the state, which goes to the polls over seven phases, he said they would together get only seven of the total 80 Lok Sabha seats in the state.

Uttar Pradesh has the highest chunk of Lok Sabha seats and is politically crucial for any party eyeing power in the state.

To a question on the future of the SP, the former Rajya Sabha member said the party is a divided lot now.

He said there was a time when the SP came third among all political parties in the country.

"It has gradually been divided to such an extent that it is now a 'half party' in Uttar Pradesh. It is half of Babua and half of Bua," Singh said, referring to SP chief Akhilesh Yadav and Bahujan Samaj Party supremo Mayawati.

He said Akhilesh Yadav has no equation either with his father, SP patriarch Mulayam Singh Yadav, or his uncles Shivpal Yadav and Ram Gopal Yadav.

A bitter family feud had hit the Uttar Pradesh-based political party in 2016.

Mulayam Singh, who was then head of the regional party, expelled his son Akhilesh Yadav and brother Ram Gopal from the party.

However, their suspension was later revoked.

"In the SP, every person is trying to cut short or settle scores with another person. In any business, if insiders start stealing things then that business does not run long," he added.

Asked about reports of accusations against him by Akhilesh Yadav, he said the former chief minister is now embarrassed and quiet.

"I am no more a part of Samajwadi Party. So why don't they all unite?" he asked.

Akhilesh had publicly accused Amar Singh of creating factionalism in the Samajwadi Party.

"Amit Shah will act as kingmaker in this election," Singh declared in response to a question on whether he would be a kingmaker and would join hands with the BJP considering actor-turned-politician Jaya Prada's move.

Jaya Prada, a two-term Lok Sabha member from the SP, is a close associate of Singh, who was expelled from the regional party and has since become close to Hindutva fountainhead Rashtriya Swayamsevak Sangh.