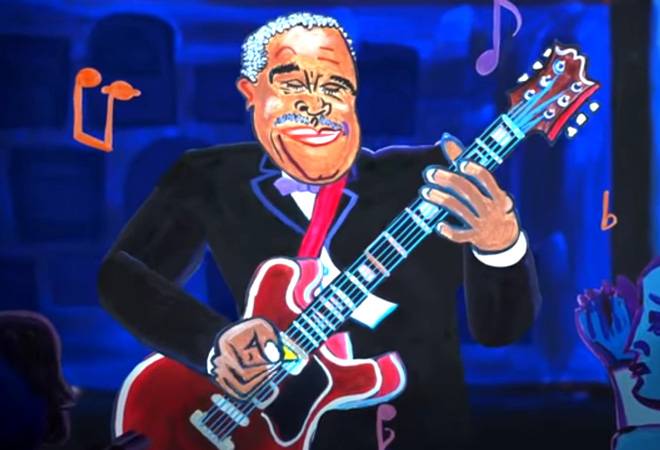 Google on Monday paid a tribute to legendary guitarist BB King on his 94th birth anniversary by creating a Doodle on him. BB King was known to be an American ace-songwriter and record producer. The doodle on BB King is created by guest artist Steve Spencer and guest animator Nayeli Lavanderos.

Who was BB King

BB King, who is known as 'King of Blues', was born in 1925 near a town called Itta Bena in Mississippi. He grew up singing gospels in churches. BB King was also known as the travelling blue-man having travelled across the country with his guitars that he named 'Lucille'.

King's 'Three O'Clock Blues' released in 1951 became his first and biggest hit, topping the Rhythm and Blues charts for five weeks. His other popular classic pieces remain 'The Thrill is Gone', 'To Know Is To Love You', 'Chains And Things' and 'Every Day I Have the Blues'.

The Google Doodle portrays BB King with his popular classic piece, 'The thrill is gone away, the thrill is gone away baby'. The doodle shows how King performed on streets and then hitchhiked to Memphis, Tennessee, and got a job at the radio station WDIA. The doodle also shows him performing at the famous Beale Street, which gave him the name 'Beale Street Blues Boy,' later shortened to "B.B".

Rolling Stones called BB King one of the world's greatest guitarist. King won 15 Grammys and sold more than 40 million records worldwide. Besides, John Lenon once said, "I wish I could just do like B. B. King. If you would put me with B. B. King, I would feel real silly."

Additionally, BB King was inducted into the Blues Hall of Fame in 1980. He also received honorary Doctorates of Music from various universities. On February 21, 2012, he performed at the White House. In October 2012, a feature documentary on the life of King titled was released, titled "B.B. King: The Life of Riley" , it was narrated by Morgan Freeman and directed by Jon Brewer. King died a natural death on May 14, 2015.