Calls for boycotts of French products have only grown stronger across the Muslim world following Macron's remarks last week. The French President's stance has drawn anger from both everyday people and some political leaders across the Muslim majority nations 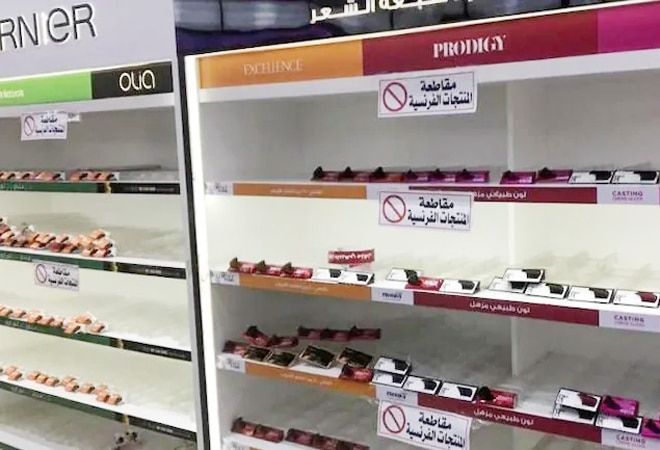 Muslims in the Arab world and beyond are widening their calls to boycott French goods after President Emmanuel Macron publicly defended Prophet Mohammed cartoons, which are regarded as blasphemous in Islam.

Macron vowed not to "give up cartoons" portraying the Prophet Mohammad last week at a memorial service held for the murdered high school teacher Samuel Paty, who was beheaded earlier this month outside his school in a northern suburb of Paris.

The French president also pledged to handle extreme Islamism in the country, which sparked widespread protests and resultant boycotts in Muslim-majority nations.

"We will not give in, ever. We respect all differences in a spirit of peace. We do not accept hate speech and defend reasonable debate. We will always be on the side of human dignity and universal values," Macron tweeted, responding to the calls of boycott and condemnation from Islamic states.

We will not give in, ever.
We respect all differences in a spirit of peace. We do not accept hate speech and defend reasonable debate. We will always be on the side of human dignity and universal values.

Paty was killed after he showed caricatures of the prophet during a class on freedom of expression.

Calls for boycotts of French products have only grown stronger across the Muslim world following Macron's remarks last week. The French President's stance has drawn anger from both everyday people and some political leaders across the Muslim majority nations.

Turkish President Recep Tayyip Erdogan called on people not to "go near French goods" urging them not to buy them. Making the remarks during a speech in the capital Ankara on Monday, Erdogan said that "European leaders must say 'stop' to Macron and his campaign of hatred."

He has been the most vocal on the political front, saying Macron needed his head examined and had lost his way. France responded by recalling its ambassador to Turkey.

Egypt's top cleric, Sheikh Ahmed el-Tayeb, who is also the Grand Imam of Al-Azhar, Sunni Islam's highest seat of learning, condemned what he said was a systematic campaign aimed at dragging Islam into political conflicts and discord.

"Hallmark of a leader is he unites human beings... rather than dividing them. This is a time when President [Emmanuel] Macron could has put healing touch, and denied space to extremists rather than creating further polarisation and marginalisation that inevitably leads to radicalisation," Khan wrote in a series of tweets.

"It is unfortunate that he has chosen to encourage Islamophobia by attacking Islam rather than the terrorists who carry out violence, be it Muslims, White Supremacists or Nazi ideologists," he added.

Hallmark of a leader is he unites human beings, as Mandela did, rather than dividing them. This is a time when Pres Macron could have put healing touch & denied space to extremists rather than creating further polarisation & marginalisation that inevitably leads to radicalisation

Protests have been held in Turkey and the Gaza Strip and are being planned in Pakistan. The beheading of the French teacher for showing cartoons of the prophet has once again ignited a debate over such depictions, which Muslims consider profane.

The growing confrontation is raising political tensions between France and some Muslim-majority nations and could put pressure on French companies.

The teacher, who was killed by an 18-year-old Chechen refugee, has been heralded at home as a national symbol of France's dearly-held secular ideals and its rejection of any whiff of religious intrusion in public spheres.

On Monday, hashtags in Arabic on Twitter calling for French boycotts were trending high. Others on Twitter criticised what they said was France's hypocrisy and bias against Muslims.

Kuwaiti stores pulled French yogurts and bottles of sparkling water from their shelves, Qatar University cancelled a French culture week, and calls to stay away from the Carrefour grocery store chain were trending on social media in Saudi Arabia and the United Arab Emirates.

The owner of Carrefour stores in the Middle East issued a statement saying the brand is a fully owned and operated business of the United Arab Emirates-based Majid Al Futtaim.

The company said it understands there is some concern among consumers across the region, but noted that it employs 37,000 people and is "proud to be from the region and for the region."

One cartoon widely shared put forth the argument that caricatures of Muslims are defended in "The West" as a fair game under freedom of speech protections, while caricatures of Jews are labelled hate speech.

In France, a law aimed at addressing the country's role during the Nazi occupation specifically mentions that anti-Semitism and Holocaust denial are crimes, but it can also be used to prosecute anti-Muslim discrimination - or hate speech, in general.

Here are some of the tweets calling for boycott of French products that have been doing rounds on social media:

If you want to boycott French products, here is the list of French companies #boycottfrenchproductspic.twitter.com/QMzsydeh2c

Thousands of people Protests in France.

😔 Change will only happen if you spread awareness and more people know. #boycottfrance#boycottfrenchproductspic.twitter.com/istpZAQfnX