The fast food chain brand would be sending a chicken sandwich into space with the help of a high-altitude balloon. 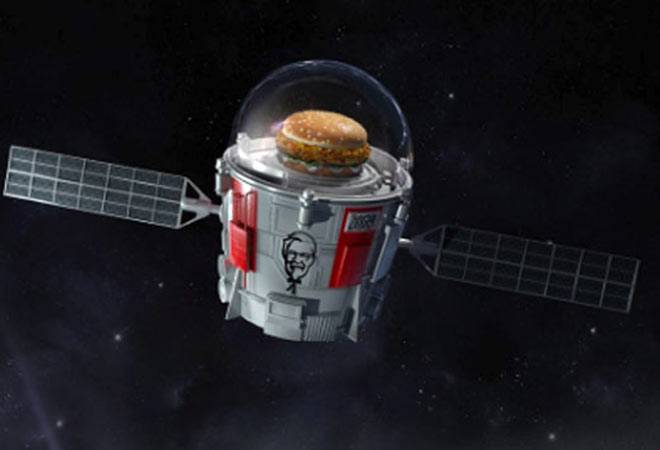 KFC on Wednesday tweeted a picture of a sandwich in space and since then twitterati are coming up with lot of curious questions.

The fast food chain brand would be sending a chicken sandwich into space with the help of a high-altitude balloon. To make this promotional activity a success, KFC has partenered with World View, a company that makes high altitude balloons.

Will the Zinger be able to survive the harsh elements of space? Only time and this giant hypobaric chamber will tell. Also, yes, it will. pic.twitter.com/b82HNmPjNM

KFC said that its Zinger chicken sandwich is scheduled to take flight on or after June 21. The company would be broadcasting the event live online. Customers can watch the live event on www.yesweareactuallysendingachickensandwichto.space

The company is calling the event, Zinger 1 space mission.

According to the company's website, "The Zinger will travel to the stratosphere where it will stay between 60,000 and 80,000 feet above the Earth's surface".

Are you really sending the Zinger chicken sandwich to space?
Yes. Yes, we are.

When you say "space," what exactly do you mean?
The Zinger will travel to the stratosphere where it will stay between 60,000 and 80,000 feet above the Earth's surface.

So ... isn't that technically not space?
Technically. But we're launching a chicken sandwich 19 miles into the air in a robotic bucket satellite. What more do you want from us?
As a fried chicken restaurant, aren't you a little underqualified to launch something into space ... or, I'm sorry, near space?
Probably. Which is why we are partnering with World View Enterprises, a company that specializes in high-altitude balloons and near-space exploration.

How fast will the Zinger be traveling on the Stratollite?
The Stratollite carrying the Zinger will ascend into space at a rate of 1,000 feet per minute. It will take approximately 1 hour and 20 minutes for it to reach altitude. At the completion of the Zinger 1 mission, the Zinger will return to Earth at a rate of 2,000 feet per minute, which will be a 30- to 40-minute journey home. And now you know some fun chicken-sandwich- based space- travel facts to throw out at parties.

How heavy is the Stratollite?
Wow, you sure ask a lot of questions. The entire Stratollite system weighs 2,000 pounds, give or take about 110 pounds for our equipment, the Zinger, and the bucket satellite.

How long will the Zinger 1 mission be?
The Zinger will be in space for four spicy, crispy days.

Can a chicken sandwich survive in the stratosphere?
The stratosphere's near- vacuum conditions and below- freezing temperatures (-80 degrees farhentite ) are actually quite optimal for preserving food. But just like astronauts need protective covering in space, so does the Zinger. Therefore, the space bound Zinger's sesame seed buns and hand- breaded chicken fillet will be treated with polyurethane and the lettuce with Freshin to help preserve the aesthetic of the Zinger.

Oh good. That's all the questions I have.
Glad we had this talk.