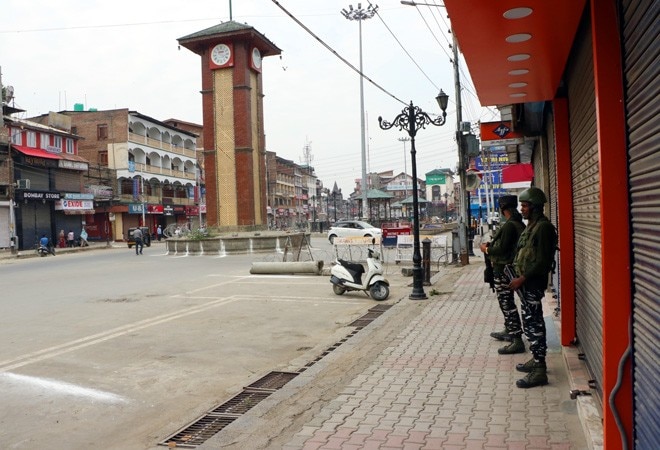 Low-speed mobile internet was restored on Saturday in Kashmir after being snapped nearly six months ago, only to be "temporarily" suspended later in the evening, with officials saying the service would be resumed after the culmination of Republic Day celebrations.

Mobile internet was suspended in the wake of the Centre's decision on August 5 last year to revoke Article 370 provisions that gave the erstwhile state of Jammu and Kashmir special status.

"The mobile internet services were temporarily suspended this evening ahead of the Republic Day functions," an official said.

He said the services would be resumed again after the culmination of functions across the Valley on Sunday.

The service can only be used to access 301 websites approved by the administration, the officials said.

"Mobile internet has been restored across the Valley. Only 2G services have been restored and only white-listed websites, excluding social media sites, can be accessed," an official had said earlier in the day.

Restoring the service was the latest step towards easing the restrictions in Jammu and Kashmir following the Supreme Court's January 10 ruling asking its administration to review within a week all orders imposing curbs in the Union Territory.

On January 18, the administration restored prepaid mobile services in the Valley and resumed 2G mobile data service on white-listed websites across the Jammu division.

The 301 sites approved include search engines and those associated with banking, education, news, travel, utilities and employment.

There was no word yet on resumption of high-speed broadband and leased-line services in the Valley.

A decision on that will be taken at an appropriate time after accessing the situation, officials said on Saturday.

The 2G mobile internet services will be available on postpaid as well as prepaid phones.

Social media applications will continue to remain out of bounds for the Valley's residents, according to a notification issued by the home department of the Jammu and Kashmir administration.

Internet services, landline and mobile phones were snapped across Jammu and Kashmir on the eve of the Centre's announcement to scrap special status of the erstwhile state and its bifurcation into Union Territories.

While most of the services except mobile internet were restored in Jammu within a week, Kashmir witnessed restoration of landlines and postpaid mobile services and internet facilities for essential services like hospitals in phases.

Though the restoration of mobile internet was welcomed by people, many said it will not be of much help due to low-speed connectivity.

Yawar Nazir, a resident of Srinagar city, said: "The restoration is a welcome news. But what are we going to do with these low speeds in the times of 4G or 5G? We cannot access websites. It is taking ages to open a website."

Another resident Mehraj-ud-din said the restoration of low-speed internet "meant nothing" for students.

"The internet ban has affected our education. It has especially affected those who had to seek admissions and to take part in various examinations. Now, even as the internet has been restored, what good will come out of it as the speeds are very low. We cannot access most of the websites," he said.

Another user Aaishan Ahmad said many people in the Valley were using social media platforms to be in touch with their loved ones abroad.

"They will still have to go for expensive phone calls. Who can imagine such a thing happening in a digital age?" he said.