On the occasion of Eid-ul-Fitr, the tradition of exchanging sweets between India and Pakistan on major festivals like Eid, Holi, Diwali and respective National days was revived, said a spokespersons in Srinagar 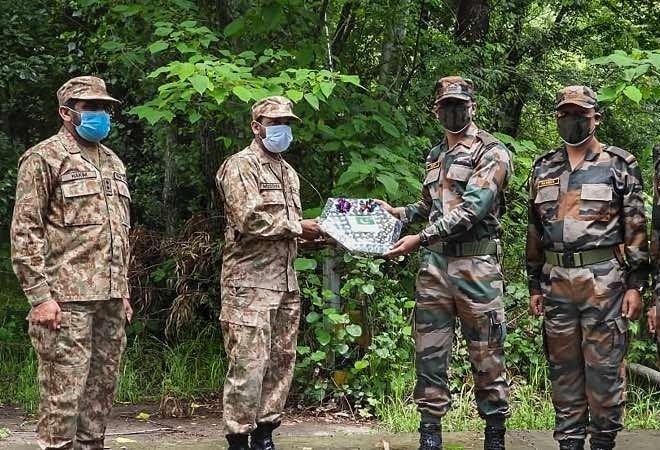 The armies of India and Pakistan on Thursday exchanged sweets at the Line of Control (LoC) in Jammu and Kashmir on the occasion of Eid-ul-Fitr, defence officials said.

"On the occasion of Eid-ul-Fitr, the tradition of exchanging sweets between India and Pakistan on major festivals like Eid, Holi, Diwali and respective National days was revived and meetings were held at the Tithwal crossing on Kishanganga River in Tangdhar, Kupwara and Kaman Aman Setu in Uri to exchange sweets and pleasantries," a spokesperson said in Srinagar.

Meanwhile, an official said in Jammu: "Indian and Pakistan army exchanged sweets on the occasion of Eid today at Chakan Da Bagh crossing point Mendhar-hotspring crossing along the LoC in Poonch."

They said the sweets and compliments were exchanged by both the armies in an atmosphere of bonhomie and festivities in wake of the newly achieved calm along the LoC as a result of renewed ceasefire which has brought warmth between the two neighbours.

The gesture was appreciated by both the armies and expected to promote goodwill and mutual trust, they said.

"Exchange of inadvertently crossed over youths on three occasions in the last two months at the zero line in Tithwal bode well for the future," the spokesperson said.

The exchange of sweets and pleasantries was conducted with full adherence to all COVID protocols by both sides, they said.

Also read: Direct supply of Covaxin to Maharashtra, Delhi, UP, 15 other states since May 1: Bharat Biotech