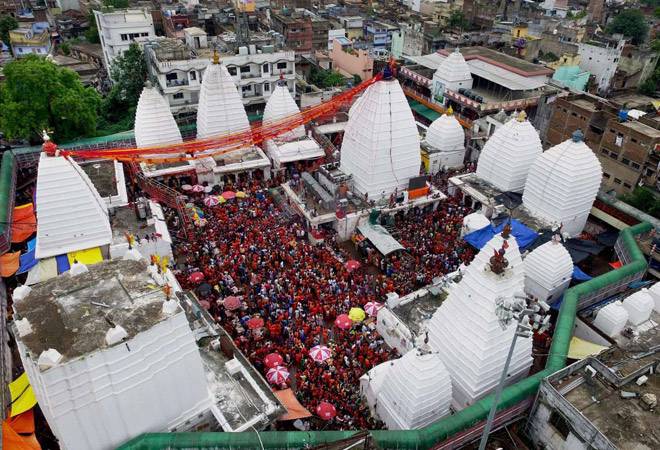 The Jharkhand High Court on Friday denied permission for holding the annual Shravani Mela at the Baidyanath Temple in Deogarh due to the COVID-19 pandemic and directed the state government to facilitate virtual prayers for devotees.

Priests will perform puja in the temple which devotees can watch virtually, it ordered.

Referring to a recent Supreme Court order allowing Rath Yatra in Odisha with certain conditions, the Lok Sabha member from Godda had urged the high court to allow kanwar yatra and open the revered shrine for devotees during the holy month of Shravan starting July 6.

The writ petition also pleaded the high court to allow opening of the Basukinath Temple in Dumka, about 40 km from Deoghar, as devotees who offer prayers at Baidhyanath Temple also visit the neighbouring shrine.

The high court had on June 30 reserved the order on the petition.

The bench pronounced the order Friday after the Jharkhand government submitted to the court that it is unable to organise the Shravani Mela and prayers in the Baidyanath Temple due to the pandemic.

It further said that due to surging cases of infections in the state, public gatherings on any occasion and puja are banned, Besides, all schools and colleges have been shut.

The state government had favoured a virtual darshan of the Shravan festival at the Baidyanath Temple.

Secretary, Disaster Management Department, Amitabh Kaushal told the court that due to the coronavirus outbreak, all places of worship have been shut by the state government.

On June 26, the high court had asked the Jharkhand government to reply and make the Bihar government a party.

During the kanwar yatra, Shiva devotees in the state fetch sacred water from the river Ganga in Sultanganj in Bihar's Bhagalpuqr district and offer it at the Baidyanath Temple.

Millions of Shiva devotees from different parts of the country and Nepal undertake the sacred pilgrimage from Sultanganj to the Deogarh temple.

Coronavirus crisis: Universities can now offer 40% of their courses online, up from 20%