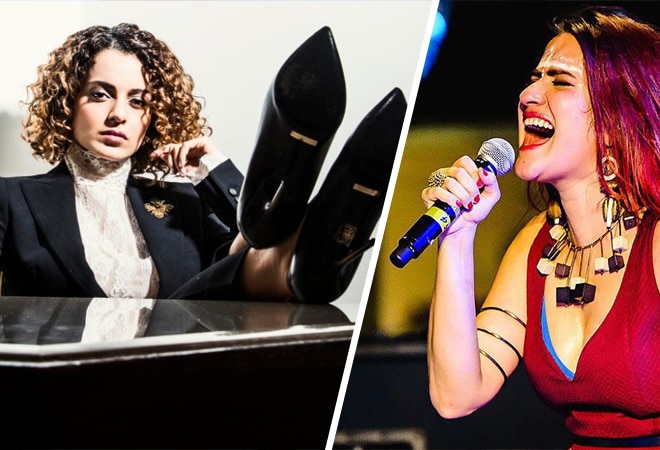 In another tweet, Sona Mohapatra also claimed that while calling Kangana 'haramkhor' was wrong but certainly not a misogynistic comment

Kangana Ranaut has blocked singer Sona Mohapatra on Twitter after the latter countered the former's 'selective feminism' jibe at Anushka Sharma. Following this, Kangana Ranaut's sister and manager, Rangoli Chandel has shared an Instagram story that read, "Sona Ji I don't even know who you are and what you do, but keep Kangana's Google page all the time commenting on everything she says, Kangana loves responding to trolls who stimulate her intellectually or emotionally. What will she talk to you about? You have nothing to offer her; she can't stand below average junk. @sonamohapatra (sic)" The Ambarsariya singer had shared the news of Kangana Ranaut blocking her on Twitter with her followers and said the Manikarnika actor 'wants to criticise everyone and everything ' but needs to learn 'how to take it' herself. Mohapatra also said that Ranaut has not ever stood up for anyone else but herself.

Also,Kangana hasn’t ever stood up for anyone but her own self & hasn’t acknowledged anyone who has cheered her in any case.That’s not a change maker or even thought leader of any worth.Yes,she’s been brave to call out some of the industry’s ills.That’s all.Will call her bluff. 🤟🏾 https://t.co/M4m9mpCT8a

Last week, Kangana criticised Sunil Gavaskar for dragging actor and Pataal Lok producer Anushka Sharma's name into cricket but had also accused Sharma of 'selective feminism' and reminded her of the fact that she kept mum when Shiv Sena threatened Ranaut and also went ahead to call her names.

Only a sex starved pervert will find sexual context to #SunilGavaskar’s statement which he made on national television for a woman, he should’ve not mentioned her, but Anushka is playing a cricketer in her next and there are several videos of her practising with her husband.

In another tweet, Sona Mohapatra also claimed that while calling Kangana 'haramkhor' was wrong but certainly not a misogynistic comment. She tweeted, "& since someone shared her latest lament about Anushka Sharma et all. I'll say this, please get yourself some feminist friends, KR, better advisors. The 'haramkhor' statement was wrong, yes, party politics, not 'misogynistic' as you claim. Don't play the victim woman card. Hurts women."

& since someone shared her latest lament about Anushka Sharma et all.I’ll say this, please get yourself some feminist friends KR,better advisors. The ‘haramkhor’ statement was wrong, yes, party politics, not ‘misogynistic’ as u claim. Don’t play the victim woman card. Hurts women https://t.co/IJoRn3VfTx