Locust swarms, which have crossed over to India from Pakistan, have been causing havoc in states like - Rajasthan, Punjab, Haryana and Madhya Pradesh - ravaging crops for over a month now 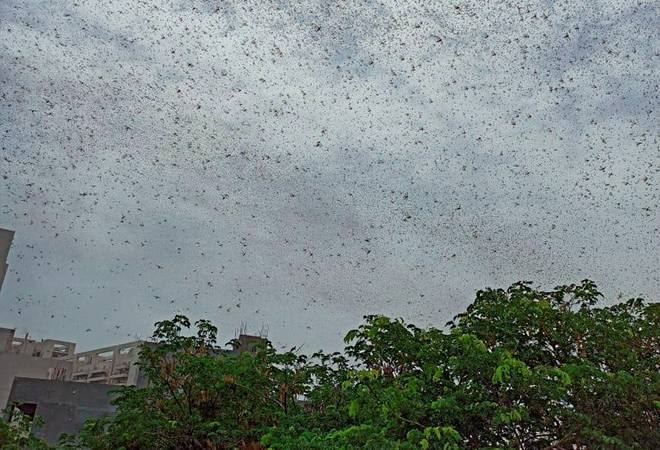 Delhi Air Traffic Control (ATC) on Saturday asked all airlines and pilots to take necessary precautions during the take-off and landing and of aircraft because of locust swarms near the airport. "Pilots of all airlines have been warned about the locust seen near the airport, we have set up a team to monitor in view of the locust," an ATC official said.

Indira Gandhi International (IGI) Airport in the national capital operates nearly 500 aircrafts in a day since the resumption of domestic flights operation after the coronavirus led lockdown. The airport official added that all flight movements and operations in the Delhi airport are currently running as per schedule, reports news agency ANI.

Locust swarms, which have crossed over to India from Pakistan, have been causing havoc in states like - Rajasthan, Punjab, Haryana and Madhya Pradesh - ravaging crops for over a month now.

On Friday, the Directorate General of Civil Aviation (DGCA) had issued operations circular to generate awareness amongst the aviation fraternity on the risks of flying through locust swarms.

"Generally, locusts are found at lower levels of the atmosphere and therefore pose a threat to aircraft during the landing and take-off of the flight," the DGCA warned, "almost all air intake ports of the aircraft will be prone to ingestion in large numbers if the aircraft flies through a swarm."

The DGCA circular added that the pilot's forward vision could also be impeded if large numbers of the insects land on the windshield flagging it as a "grave concern during landing, taxi and takeoff phase."

Air traffic controllers, when aware of the presence of nearby locusts, should immediately inform all arriving and departing flights, the DGCA circular said.

"The only favourable aspect is that locusts do not fly at night, thus providing better opportunity to sight and avoid them," said the aviation regulator.

Delhi Government had also issued advisory to control and contain the menace of desert locusts in the national capital.

District Magistrates have been advised to deploy adequate staff to make all possible arrangement for guiding people to distract locusts by making high decibel sound through beating of drums and utensils, playing music on high volume, neem leaves and burning firecrackers.

Also Read: No rejection of claim if your health insurance plan is 8 years old

Coronavirus vaccine could be ready in 12-18 months, says WHO Chief Scientist