PM Modi in Man vs Wild: Recalling his childhood years, PM Modi said though there was poverty his family was always connected with nature. 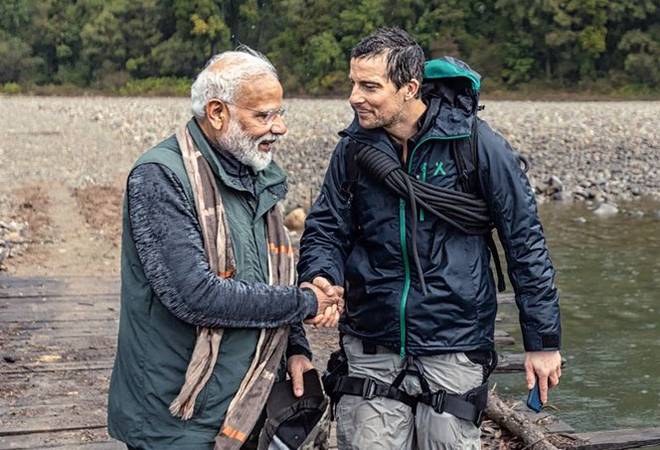 During Bear Grylls' show Man vs Wild that featured Prime Minister Narendra Modi, the leader said that his trip to the national park is his first vacation in 18 years. "Today, if I consider this time as a vacation, then I must say I am taking a vacation for the first time in 18 years," PM Modi said. In the episode that was aired on Discovery Channel on Monday evening, PM Modi and the survivalist can be seen in the wilderness of Uttarakhand's Jim Corbett National Park.

While making their way into the national park, the leader and the survivalist spoke about a host of subjects. One of the things they spoke about was PM Modi's experiences in life. When Grylls asked if he ever felt nervous in a political rally, PM Modi said that nervousness has never been a part of his experience. "My problem is that I have never experienced such fears. I'm unable to explain it to people what nervousness is and how to deal with it because my in-built temperament is very positive. I see positivity in everything. And because of that reason, I am never disappointed," he said.

Grylls, who has had celebrity guests before on his show such as former American President Barack Obama, asked PM Modi if he ever dreamt of becoming a prime minister. To that, PM Modi said that his focus has always been the development of the nation.

"I was the chief minister of a state first. I worked as a chief minister for 13 years, which was a new journey for me. Then my country decided I needed to do this job. So I have been doing this for the last five years. But the focus has been always been on one thing and that is development. And I am satisfied with that job," said PM Modi.

"It never occurs to me who I am. I am above all this. When I was a chief minister and even now as the prime minister, I only think of my work, my responsibilities. My position never goes to my head," he added.

Recalling his childhood years, PM Modi said though there was poverty his family was always connected with nature. So much so that his father, despite there being no money, would buy 20-30 postcards and send it to relatives to inform them about the first rains in their village, he said.

PM Modi talked about living with love for nature and not exploiting it for one's own ends but leaving it for the future generations.

Like most things, this episode was an opportunity that memelords could not let go of. After the episode, Indian twitterati flooded the internet with their reactions.

Is this #ManVsWild or Mann ki Baat?

In the first 15 mins. Modi has mentioned

This is the 1st vacation I am taking in 18 years

While Bear Grylls is patiently waiting to eat a grasshopper. #ManVsWild

Wife to me - "What is this lipstick mark on your collar. Are you having an affair??"

Me to wife after watching #ManvsWild - "My childhood was very poor. We used to go to the Himalayas bare feet to wash the lipstick marks on the collar"

*Wife breaks down and hugs me

Bear Grylls to Modi: You are the most important man in India. My job is to keep you alive.

Who said this is Man vs wild? This is वन की बात! 😂 pic.twitter.com/YE1Ud6KAhW

PM @narendramodi - when you live in line with nature, the nature protects you.

Such a huge message to all to protect wild life & Nature.#ManVsWild#PMModionDiscovery

Trump has taken Jammu and Kashmir mediation offer off the table: Indian envoy in US