This comes after several railway stations across the country have been revamped including Jaipur Junction, Mathura Junction, Haridwar Junction, Sainagar Shirdi Station, Lonavala Station, amongst others. Indian Railways has redesigned the NDLS with attractive paintings and colorful patterns.

The New Delhi Railway Station has been revamped with newly added paintings across the station premises. Under its station development and beautification drive, Indian Railways has redesigned the NDLS with attractive paintings and colorful patterns. Several wall paintings and ceiling paintings can be seen at the picturesque station.

The beautification drive in New Delhi Railway Station seems to be part of an ongoing revamp of stations across the country. Several railway stations including Jaipur Junction, Mathura Junction, Haridwar Junction, Sainagar Shirdi Station, Lonavala Station have been recently redeveloped. New features like improved waiting halls, lounges, toilets, renovated parking areas have been added to these stations. By the end of this finacial year, the Railway Ministry aims to redevelop as many as 68 railway stations across the country. 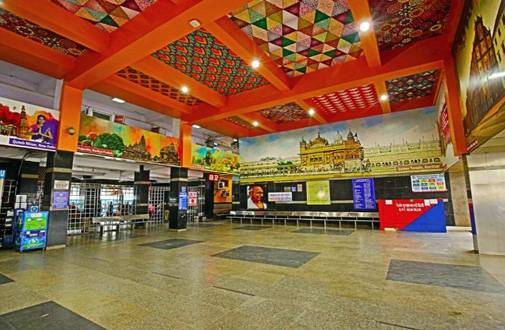 Additionally, the Piyush-Goyal led Railway ministry recently stated that as many as 690 railway stations across the country will soon have "airport-standard" lighting. Meanwhile, the ministry is also converting two prominent stations- Habibganj station and Gandhi Nagar station into world-class stations. Indian Railway Stations Development Corporation (IRSDC) has completed 70% of the civil work at Habibganj station and 82% at Gandhi Nagar station, as reported on their website.

This comes after Sainagar Shirdi Station, which falls under the Solapur Division of Central Railway Zone, was revamped under the Railway Ministry's redevelopment drive. It is now euipped with passenger friendly facilities like a foot over bridge (FOB), lifts, tree plantation along with a coach guidance system.

Also, the Indian Railways recently signed a memorandum of understanding with Mahrashtra Government to hand over 45 acres between Sion, Matunga and along Mahim section for the Dharavi redevelopment project.

"We are ready to share profits. The state is also ready to construct staff quarters that are going to be demolished for the project", said SVR Srinivas, CEO, Dharavi Redevelopment Authority (DRA).