PM Modi in Tamil Nadu: Hashtags GoBackModi and TNWelcomesModi are two of the top trends on Twitter today as the Prime Minister visits Madurai and Kochi. 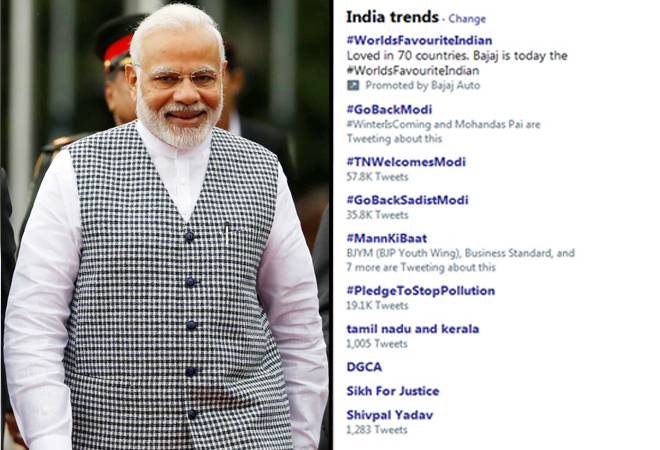 Twitter is at war with hashtags GoBackModi and TNWelcomesModi over the Prime Minister's visit to Tamil Nadu's Madurai today. Lot of the anger against the Prime Minister stems from the Centre's alleged inability to help the people of the state during the onslaught of Cyclone Gaja. The cyclone that wreaked havoc for ten days in November last year ended up leaving over 3 lakh people homeless.

The Prime Minister is visiting Madurai to lay the foundation for an All India Institute of Medical Sciences (AIIMS).  He will also inaugurate the super speciality blocks of Rajaji Medical College (Madurai), Thanjavur Medical College (Thanjavur) and Tirunelveli Medical College (Tirunelveli) as a part of upgradation projects of government medical colleges. The Prime Minister will also visit Kochi on the same day and unveil a plaque and dedicate an integrated refinery expansion complex of Bharat Petroleum Corporation Limited to the nation.

With this schedule, Twitter has been divided with some welcoming the Prime Minister warmly, while others are criticising.

The demonstration is not against the AIIMS, but Modi and his government that is neglecting and functioning against the interests of Tamil Nadu, he said.

Angry citizens made GoBackModi one of the top trends.

No Use of Foundations Stones..

Ceremony is nothing but a BJP Campaign!!#BJPfailspic.twitter.com/OGJlXpREJ5

When we were affected by Gaja cyclone, no words from you, so now for you #GoBackModi

Since you have not kept your promises on ... Please #GoBackModi

Other have, however, welcomed Prime Minister.

#TNWelcomesModi PM Modi has always been with the Tamil people and their welfare. Welcome to TN #PMModi

Another achievement of modi government AIIMS at madurai

Modi ji Govt is Championing the cause of Healthcare for All with Ayushman Bharat (PM-JAY) now #AIIMSMadurai to our #Madurai#MaduraiWelcomesModi and #TNWelcomesModi always 🙏🙏🙏 pic.twitter.com/XLQrweGdB4