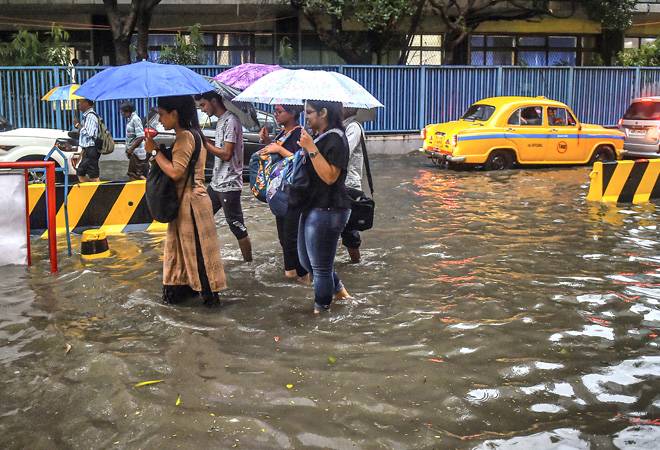 The city received 186.1 mm rainfall in the past 24 hours till around noon on Saturday

Life was thrown out of gear in most parts of the metropolis on Saturday, following torrential rain that led to waterlogging in low-lying areas and snapped road links at several places.

The city received 186.1 mm rainfall in the past 24 hours till around noon on Saturday, the Regional Meteorological Centre here said.

The Met office has forecast heavy rain and the civic body found it tough to drain out rain waters as the precipitation continued throughout the day.

City Mayor Firhad Hakim who went around the city to take stalk of the situation said, "We had very heavy rains and the drainage system has capacity much lower than this.

Therefore many places were waterlogged."

"Most of the pumps are working to clear the water. But certain low lying areas in Kidderpore, Bodyguard Lines and Behala, Thantania Kali Bari, Tollygunge are still under water," the mayor told PTI.

"There are areas where drains are stuck because of plastic and other materials. Otherwise, water has receded in most parts. The rains have also now eased. If it stays this way, things should be back to normal later tonight," he said.

Flight operations were also affected, as take-off and landing was delayed, said a senior official of the Netaji Subhas Chandra Bose International Airport.

Train movement in Sealdah and Howrah sections of the Eastern Railway was slow, but there has been no cancellation so far, Chakraborty said.

Fishermen are advised not to venture into the sea on Sunday as squally wind speed exceeding 45 kmph and rough to very rough seas is likely over the North West Bay of Bengal, they said.

Fire breaks out at AIIMS Delhi due to short circuit; 34 tenders rush to the spot