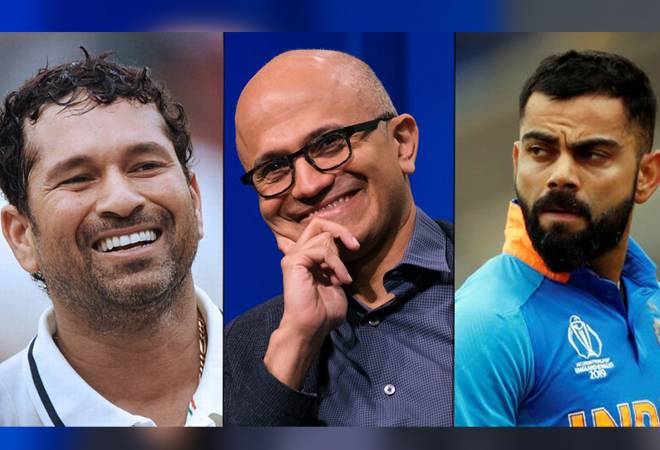 If you are an Indian, chances are that you are a major cricket fan. It is no different with India-born Microsoft CEO Satya Nadella. And like every cricket fan in the country, he too is spoilt for choice when it comes to picking his favourite. Nadella who was in India on a three-day visit recently was asked at the Young Innovators Summit in New Delhi if he would pick Virat Kohli or Sachin Tendulkar. "This is like picking religions. I would say Sachin from yesterday and Virat today," said Nadella to Microsoft India president Anant Maheshwari who posed the question.

The Microsoft CEO was also asked if he would pick coding or cricket. "Coding for cricket," was his reply. "Just a day ago I met Anil Kumble. By education, he is an engineer, and now he has a startup, which puts an internet of things sensor on a bat. The sensor records the speed of a ball and the power of a shot. The data collected from the sensor can be used to analyse shot selection and speed," he added.

Also read: This is the worst advice Satya Nadella has ever received

He also spoke about what kind of superpower he would want. While a bit unusual, his answer was a very understandable one. "If I could read all the books that I have bought... I would so much be better off," he told Maheshwari.

Nadella's love for cricket is pretty well-known. In his book 'Hit Refresh' that was published in 2017, the Microsoft CEO had professed his love for the game. "No matter where I am, this beautiful game is always in the back of my mind. The joy, the memories, the drama, the complexities, and the ups and downs - the infinite possibilities," he says in his book.