The Greater Chennai Corporation (GCC) has issued an advisory to all to avoid going out until the cyclonic storm weakens by noon. The IMD said that light to moderate rainfall is expected in most places, with heavy to very heavy rainfall in some northern areas in Tamil Nadu.

The roof of a fuel station in Egmore in Chennai collapsed due to heavy rain.

Cyclone Mandous made landfall in Tamil Nadu’s Mamallapuram, 30 km from Chennai, between 10.30 pm and 11.15 pm Friday night. The storm, which crossed Puducherry and Sriharikota, around 1.30 am with a wind speed of 75 km an hour led to a deep depression with Chennai receiving up to 115.1 mm of rain till 5.30 am. The storm and heavy rains in the coastal areas in Tamil Nadu wreaked havoc in Chennai. A large number of trees were uprooted, the electricity supply was disrupted, and waterlogging was reported in many low-lying areas across the city.
Early on Saturday (December 10), the India Meteorological Department said that the cyclonic storm Mandous has gradually weakened into a deep depression over the north Tamil Nadu coast, and things will be normal by noon. The IMD said that light to moderate rainfall is expected in most places, with heavy to very heavy rainfall in some northern areas in Tamil Nadu.

The cyclonic storm “MANDOUS weakened into a Deep Depression over north Tamilnadu coast. To move nearly west-northwestwards and gradually weaken into a depression by noon of 10th december.For details visit : https://t.co/KLRdEFHiFR pic.twitter.com/Zt41j7960h

The Greater Chennai Corporation (GCC) has issued an advisory to all to avoid going out until the cyclonic storm weakens by noon. “Many trees have fallen down in 3 hours and GCC is taking measures to remove them. Motor pumps are being used to remove water stagnation in low lying saucer shaped areas,” it said.
GCC Commissioner Gagandeep Singh Bedi took a stock of the situation with flood monitoring officials, the zonal officers, and the engineers' team after cyclone Mandous weakened into a deep depression.

As guided by the Hon'ble @CMOTamilnadu GCC Commissioner Thiru @GSBediIAS is on inspection with Flood Monitoring Officers and other officials of #GCC. The Zonal Officers and Engineers team are also on inspection around the city.#ChennaiCorporation#HeretoServe#MandousCyclone pic.twitter.com/9SHWqWhg7J

The cyclone’s strength is weakening and it is moving west-northwestwards so areas in the northwest districts will witness strong winds of 55-65 kmph, which will decrease by evening to 30-40 kmph, said S Balachandran, DDGM, RMC Chennai. 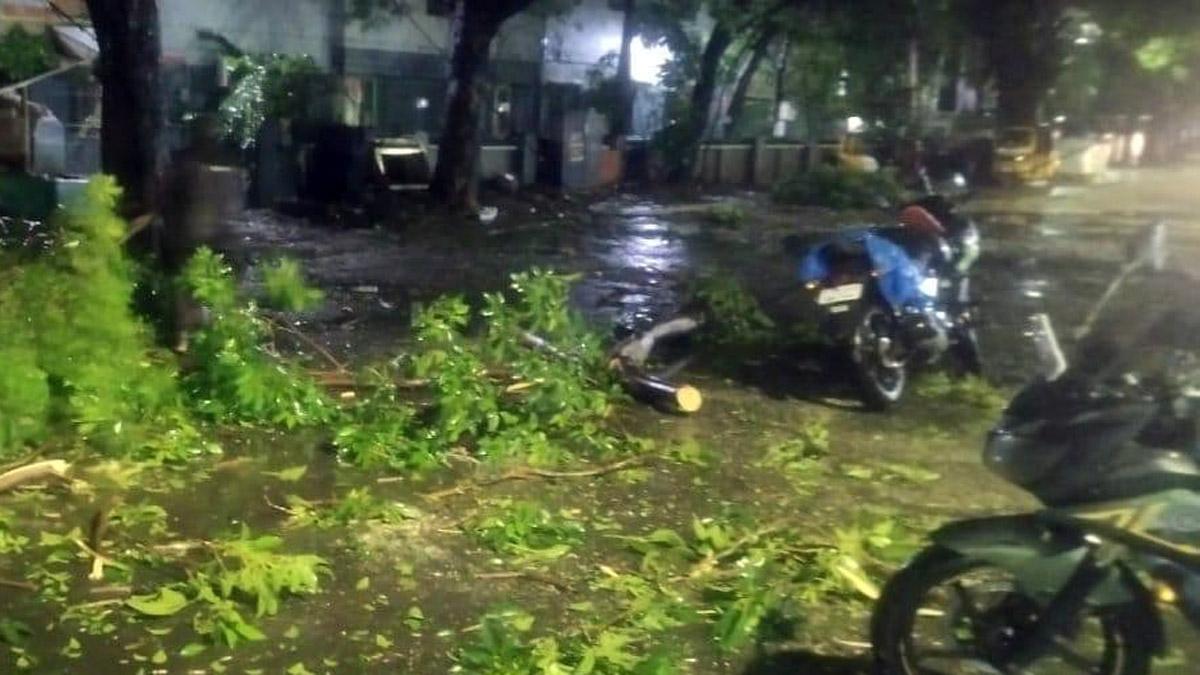 Cyclone MANDOUS rear sector has moved into land and landfall process has completed.
It is very likely to move nearly westnorthwestwards and gradually weaken into a deep depression during next 2 hours and into a depression by noon of 10th december. pic.twitter.com/4okZunbTTd

Cyclone Mandous has badly affected low-lying areas such as MMDA Colony of Arumbakkam where waterlogging was witnessed due to heavy rainfall.

Though the intensity of the cyclone has weakened, three districts in Tamil Nadu are still on red alert. These are Chengalpattu and Kancheepuram, near Chennai, and Villupuram.
Schools and colleges were already shut in 12 districts of the state, including Chennai.
Some parts of Maharashtra might receive unseasonal rainfall in the next 48 hours due to the cyclone storm Mandous, the India Meteorological Department (IMD) said. Mild or medium rainfall is expected to hit Konkan, Marathwada, and most districts of central Maharashtra after 48 hours.
The IMD had said that on the intensity scale, Cyclone Mandous was earlier classified as 'Severe Cyclonic Storm', which is the fourth in the list of cyclone severity and intensity. The winds in this cyclone blow at a speed of 89-117 km per hour. Now, it has come down to Cyclonic Storm with winds at 62-88 km/hour.

#WATCH | A large tree got uprooted in Egmore area of Chennai due to strong winds caused by #CycloneMandous, causing extensive damage to the adjacent fuel station. #TamilNadu pic.twitter.com/TSAFYJfAZD

Chennai Police reopens vehicle movement along ECR resumes
The Greater Chennai Traffic Police on Saturday said that vehicular movement along the East Coast Road (ECR), which was stopped ahead of the landfall of Cyclone Mandous, reopened at 6 am. It was closed since 10 pm last night. In a tweet, the police said that Traffic was not allowed bothways on ECR between Akkarai and Kovalam, but now the traffic is allowed as usual.

In view of the Mandous cyclone, Traffic was not allowed bothways on ECR between Akkarai and Kovalam except for the residents living in this stretch and emergency services vehicles from 10 pm on 09.12.2022. From 6 am on 10.12.2022, Traffic is allowed as usual.

Parts of Chennai to go without power today
The Tamil Nadu Generation and Distribution Corporation (Tangedco) has said that power supply will be suspended in parts of Chennai today in the IT Corridor for carrying out maintenance work in the city after Cyclone Mandous made landfall late on Friday. Parts of Chennai will face a power shutdown from 9 am to 2 pm. The supply is expected to resume around 2 pm.