A Samajwadi Party leader said that red and green-coloured tiles -- the colour of the SP flag -- were used at a toilet at Lalit Narayan Mishra Railway Hospital in Gorakhpur. He said that the party will not tolerate such insult 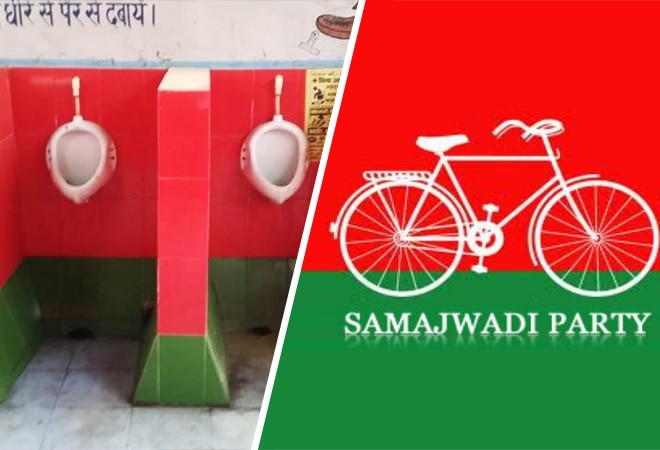 The Samajwadi Party objected to the colours used at a toilet at a railway hospital in Uttar Pradesh's Gorakhpur. SP said that the colours red and green -- that are also used in its flag -- used at a toilet was tantamount to insulting its party flag. Party workers demanded action against the officials responsible for choosing the colour for the toilet.

A Samajwadi Party leader has said that red and green tiles were used at a toilet at Lalit Narayan Mishra Railway Hospital in Gorakhpur. "We will not tolerate such insult to our party flag and we demand the railway administration change it and the district administration act against those behind it. The toilet was constructed 3-4 months ago, but it came into our notice on Wednesday," SP district president Ram Nagina Sahini said.

SP workers took to the streets to protest the use of the colours. They defaced the toilet with black paint.

Gorakhpur: Samajwadi Party (SP) workers protest against the use of tiles of their party flag's colours in a toilet at Lalit Narayan Mishra Railway Hospital. pic.twitter.com/XBrk80ju5r

Simultaneously, #ShameOnYouPiyushGoyal was also trending on social media after followers and supporters of the party took to Twitter to question the motives of the ruling party. BJP leader Piyush Goyal is the Railway minister.

Supporters of both SP and BJP were at loggerheads on social media. While SP supporters invoked casteist mindset for painting the toilet in the colours of the party's flag, BJP supporters came to the defence of the Railway minister and asked if they have copyrighted the colours red and green.

Also read: PM Modi talks about other countries but not unemployment in his speeches: Rahul Gandhi

Also read: 'PM Modi has decided when India will be at war with China, Pakistan': UP BJP chief