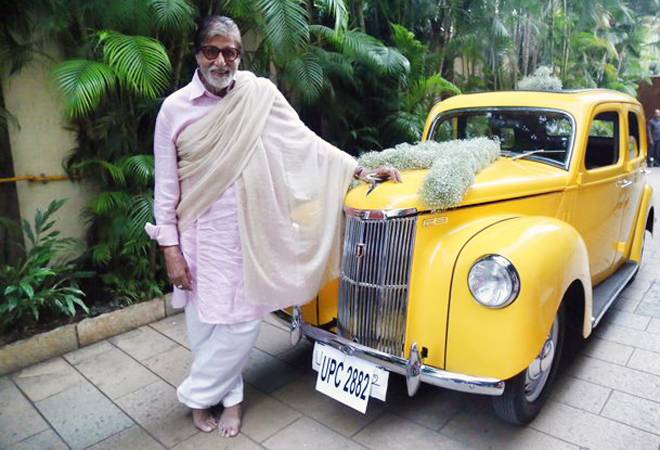 Big B with a vintage Ford Perfect

Bollywood veteran Amitabh Bacchan recently shared a picture of him standing in front of a vintage car, which he said turned him "speechless". The picture shared on micro-blogging site Twitter shows the actor posing with a vintage Ford Prefect in yellow.

Bachchan tweeted: "There are times when you are speechless .. I am now .. been trying to express, but nothing comes out ... a story of times gone by .. a gesture beyond time.."

He also revealed in his blog why the car was so special to him. "In one of my earlier blog posts, there had been mention of our first family car, in Allahabad.. it was then the Ford Prefect.. and that was it," the veteran actor wrote in his blog.

One of his friends, Anant gifted him the same model as a surprise. "...he has after months been able to trace and track a Ford Prefect, of the same model, got it fixed and workable, had it painted and drove it to my house to gift it to me .. even the number plate he had fixed for the moment .. the 2882 was the number of that first car of ours," Big B said.

Bacchan Senior is currently shooting for Ayan Mukherji's sci-fi film Brahmastra, the first part from the trilogy. The film also stars Ranbir Kapoor and Alia Bhatt in lead roles. The film has been shot in Bulgaria, New York and Mumbai. He will also be seen on Gulabo Sitabo, a film by Shoojit Sircar along with Ayushmann Khurana. The movie releases on April 17, 2020.

Thalaiva Rajinikanth goes Into The Wild with Bear Grylls