Vadodara rains: A release by the state government said that Vadodara received 442 mm rainfall, the highest in Gujarat between 8 am to 8 pm on Wednesday. Of this, 286 mm of rain fell in just four hours ending at 8.00 pm, it added. 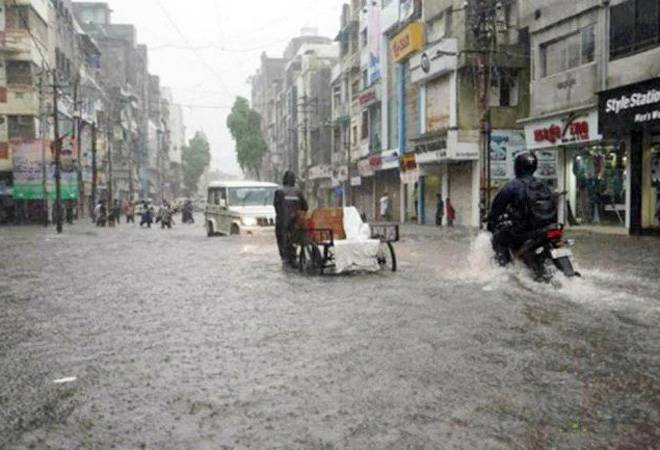 Vadodara rains: Heavy showers has lashed Vadodara in Gujarat, with the city receiving a staggering 442 mm rainfall in the past 12 hours. Due to waterlogging, schools have been shut till August 1 (Thursday), several trains have been cancelled and operations have suspended at the Vadodara airport till 9 am on Friday.

Weather experts say the state could experience "heavy to very heavy rains" in the next two days. The airport, which is on the outskirts of the city, was temporarily closed and two domestic flights were also cancelled on Wednesday, said the airport authorities.

A release by the state government said that Vadodara received 442 mm rainfall, the highest in Gujarat between 8 am to 8 pm on Wednesday. Of this, 286 mm of rain fell in just four hours ending at 8.00 pm, it added. Western Railways also said some trains were either cancelled or diverted owing to "heavy waterlogging".

#rains have drastically reduced over #Vadodara with the city recording just about 3 mm in the last 9 hours between 8.30 pm yesterday and 5.30 am today#VadodaraRains#Monsoon2019#floodinghttps://t.co/36OKZEJHdS

The state government directed the local administration to move people from lying-areas in Vadodara if required as water entered into houses in several settlements.

Gujarat Chief Minister Vijay Rupani convened a high-level meeting on Wednesday evening to review the situation in Vadodara and directed IAS officers Vinod Rao and Lochan Sehra to provide guidance to the local administration, the release stated. The Chief Minister also appealed the people in low-lying areas to be patient and cooperate with the district administration during evacuation.

According to the latest IMD forecast, several parts of Gujarat, comprising Saurashtra, would get "heavy to very heavy rains" during the next two days. The weather forecaster has predicted "heavy to very heavy rainfall" in South and North Gujarat regions, especially in Valsad, Bharuch, Navsari, Tapi, Banaskantha and Patan districts. "Strong winds, speed reaching 40-50 kmph, are likely to prevail over north, central and adjoining southwest Arabian Sea,eastcentral Bay of Bengal and along and off Gujarat-Maharashtra-Goa coasts," IMD said in its statement. Fishermen are also warned not to risk venturing into these areas.

Here is the list of trains that are cancelled in Vadodara: