A 6.4 magnitude earthquake which rocked Croatia Tuesday night has claimed 7 lives so far 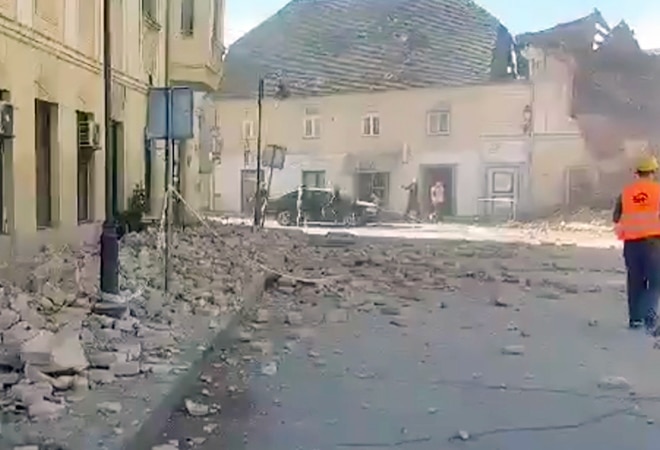 A 6.4 magnitude earthquake which rocked Croatia Tuesday night has claimed 7 lives so far. The search for survivors has been going on since last night. The damages were restricted in and around the town of Petrinja, 50 kilometres away from the capital Zagreb.Watch some videos of the dreadful earthquake which hit Croatia.

Spinechilling moment of earthquake during live tv in Croatia pic.twitter.com/3TqrJ1we7v

Strong earthquake in Petrinja, Croatia (6,3 magnitude), felt in the Slovenian parliament, Ljubljana. I just hope and pray that there are no casualties!🙏 pic.twitter.com/lVFW63uXTO

Look at the moment of #earthquake in #petrinja 😱

This young boy was pulled from the rubble in the town of Petrinja, in Croatia after a 6.4 magnitude earthquake hit the country.

There are reports of at least six deaths, “many" injuries and damaged buildings near Zagreb.

Read more on the #earthquake: https://t.co/bWdk7v45bupic.twitter.com/xHSFafImoz

if you’re religious pray for croatia and people in sisak and petrinja pic.twitter.com/XCusRZv4Ui

In the nearby town of Sisak, also badly damaged by the quake, schools opened their sports halls to those who could not sleep at home.

The earthquake, which hit around 1130 GMT according to the US Geological Survey, rattled Petrinja and the surrounding area just a day after a smaller earthquake struck in the same vicinity, causing some damage to buildings.

Also watch: New Year celebration in times of COVID: Rules for your state