Government may use ESMA law on DTC drivers

Delhi commuters had a tough time on Monday as Delhi Transport Corporation buses stayed off the roads following to a strike call given by its employees, as the govt has threatened to invoke ESMA. 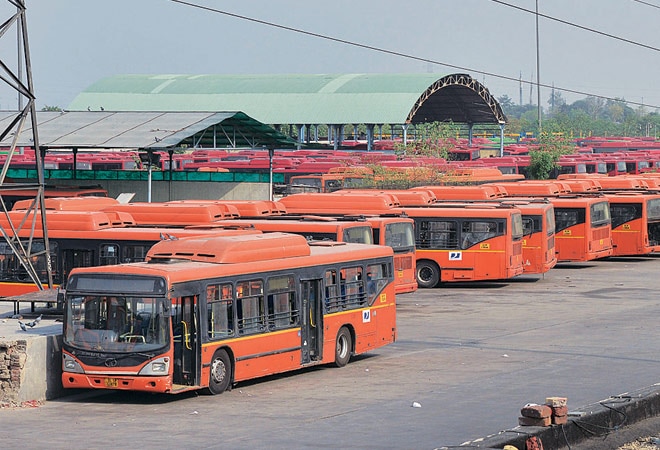 Buses parked at Millennium bus depot as DTC drivers went on strike over the murder of a colleague in New Delhi on Monday.

Delhi commuters had a tough time on Monday as Delhi Transport Corporation (DTC) buses stayed off the roads following to a strike call given by its employees, as the government has threatened to invoke ESMA.

The protesters are demanding a compensation of Rs 1 crore to the family of a DTC driver who was beaten to death on Sunday.

Meanwhile, sources in the Delhi government said: "People are facing hardship due to the strike. ESMA (Essential Services Maintenance Act) is likely to be imposed against DTC workers if they do not resume work tomorrow."

However, the workers have threatened to continue to stay off roads if their demand is not met. The strike was called to protest the murder of driver Ashok Kumar (42), allegedly beaten to death by a youth after his bus had grazed the latter's bike in Mundka area of west Delhi on Sunday.

"The sum of Rs 5 lakh is no compensation. When Delhi Government can pay Rs 1 crore to relatives of a Delhi Police employee despite the force not coming under its jurisdiction, then why can't it give the same sum to the kin of a bus driver?" asked Rampath Kasana of Delhi Parivahan Mazdoor Sangh.

Several schools had asked parents to make arrangements for dropping and picking up children.

Heavy public rush was witnessed on roads and in Metros during peak hours.

Cases of overcharging by auto rickshaws were also reported.

However, DTC claimed that it managed to ply 704 buses. "We are seeking help from Delhi Police and other authorities to ensure maximum buses run," a senior DTC official said.

Meanwhile, the government has announced to bear all the medical expenses of the deceased's wife.