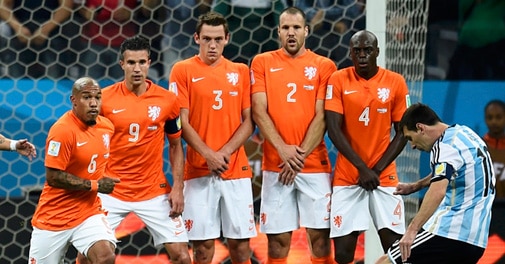 Argentina's Lionel Messi (R) takes a free kick near Netherlands' players during their 2014 World Cup semi-finals at the Corinthians arena in Sao Paulo on July 9, 2014.

The just-concluded FIFA World Cup has proved to be a massive hit with football lovers across India, with women comprising nearly a third of the number of viewers.

Multi Screen Media (MSM), which aired the FIFA World Cup finals on its Sony Six channel, says 65 million people in India watched matches up to the quarterfinal level. That's a jump of 30 per cent compared with 50 million at the same stage in the 2010 edition of the global tournament. The final viewership numbers have yet to come.

In fact, MSM roped in actor John Abraham as the brand ambassador for FIFA in India not only because he is a football enthusiast but also because of his immense popularity with women.

Rohit Gupta, MSM's advertising and sales head, had previously told Business Today in an interview that just as the broadcaster managed to get women to watch the Indian Premier League cricket tournament, it wanted to create the same success story in football.

The strategy has definitely paid off as social media trends such as Facebook updates show a significant involvement of women. Though the final FIFA viewership numbers are yet to come, Prasanna Krishnan, Business Head, Sony Six, is elated that the FIFA tournament has got the channel almost a third of viewership numbers of the IPL. "The IPL got us 195 million viewers," he says.

Though matches played at 9.30 p.m. India time got bulk of the viewership, Krishnan says midnight matches were also very popular. This shows football is growing aggressively in India, he says.

The biggest lesson for the broadcaster, says Krishnan, has been the Bengali language feed that it offered in West Bengal. Sony Aath, MSM's Bengali channel, recorded a viewership of 5.6 million in Kolkata city alone in the first week of the tournament. "This will become a trend in sports broadcast where more channels will develop a language strategy," says Krishnan.