Sachin Tendulkar had retired from international cricket after playing his 200th Test against West Indies at Mumbai in November, 2013. 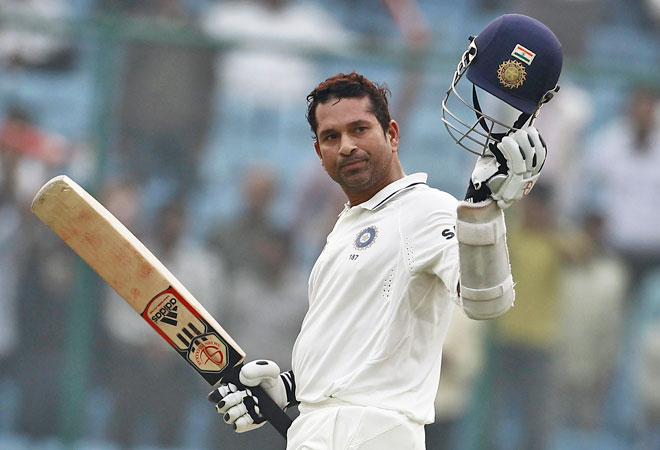 Sachin Tendulkar raises his cap in celebration after completing 15,000 runs in his test career on November 8, 2011. (Photo: Reuters)

Sachin Tendulkar's farewell Test jersey, which the batting great donned for his last (200th) Test match (against West Indies), has fetched a whopping Rs 6 lakh during a gala auction hosted by Christie's at the imposing Umaid Bhawan Palace in Jodhpur.

Shiv Raj Singh, son of the erstwhile ruler of Jodhpur Gaj Singh II and host of the second edition of the Jodhpur One World Retreat, bid for the iconic jersey on Saturday night.

Tendulkar had retired from international cricket after playing his 200th Test against West Indies at Mumbai in November, 2013.

The proceeds from the charity event will go to the Indian Head Injury Foundation, set by Singh for spreading awareness and mustering resources for people suffering from head and brain injury, in a follow up of a fatal head injury sustained by Shiv Raj Singh in 2005.

The glitterati included personalities like Pawan and Rahul Munjal (Hero Group), Shivender Singh (Fortis Hospital), K P Singh (DLF Group) and many other along with Gaj Singh himself and his daughter Shiv Ranjani, who bid generously for the auction.

"This money will help in achieving the objective of this initiative and will go a long way in ensuring that suffering caused by head and brain injury could be addressed in effective manner," Singh said.

Book review: How to help an elephant make a U-turn