The aircraft has been built not just to fly around the world but also carry a message demonstrating effectiveness of clean technologies and importance of sustainability. 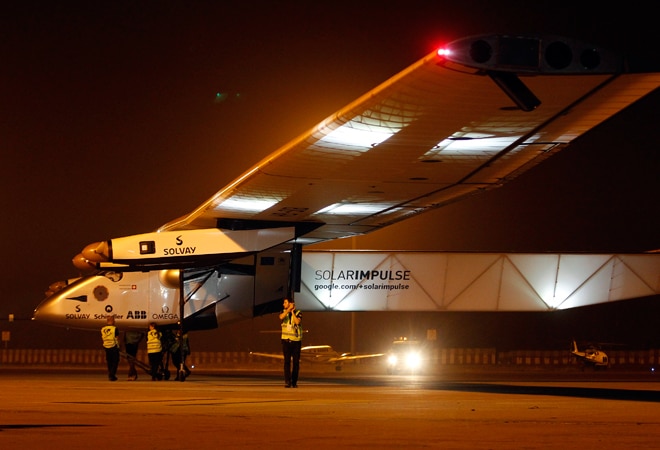 The aircraft landed at the Ahmedabad airport around 11.45 pm. (Photo: Reuters)

The aircraft landed at the Ahmedabad airport around 11.45 pm.

The flight was received with loud cheers and clapping by a large group of people gathered at the airport to witness the historic landing.

The aircraft has been built not just to fly around the world without an iota of fuel, but also carry a message demonstrating effectiveness of clean technologies and importance of sustainability.

Powered only by the sun's rays, the aircraft took off from Muscat on Monday and flew over Pakistan before entering Indian airspace over the Arabian Sea towards Gujarat, an official of the Aditya Birla Group, which is hosting the flight here, said.

"It is flying at a speed of around 60 km per hour - or roughly equivalent to a scooter - under different weather conditions. We expect it to land anytime before midnight," the official, requesting anonymity, told IANS in Ahmedabad.

The Si2 is the brainchild of founders Bertrand Piccard - a psychiatrist who flew around the world in a hot-air balloon in 1999 - and former Swiss fighter pilot Andre Borschberg - also an experienced flight design engineer - who are alternating at the aircraft controls.

"Si2 fits in with our strategy of creativity, innovation and drive and it drives the message of synergising growth with responsibility. We are delighted to be the India host on its ground-breaking flight around the world," said Aditya Birla Group chairman Kumar Mangalam Birla.

The revolutionary single-seater aircraft is made of carbon fiber, with the 72-metre wingspan, larger than a Boeing 747 but weighing 2,300 kg, or as much as a family car.

Its 17,248 solar cells and four lithium batteries, weighing 633 kg, supply the electric motors with enough renewable energy for a 24x7 flight, up to an altitude of 8,500 metres - less than the height of Mount Everest which stands at 8,848 metres.

The project is part of the #FutureIsClean initiative that has been launched to raise awareness about clean technologies.

The Si2 is an airborne laboratory, genuinely made from technological solutions developed by a multi-disciplinary team of 80 specialists and more than a 100 partners and consultants.

They worked for over a decade to bring Si2 from the drawing board to a flight of reality taking into consideration aspects of delicate balance between maximum efficiency, least possible weight and extreme reliability of its photovoltaic cells.

Besides an overnight stopover in Ahmedabad, Si2 is also expected to halt in Varanasi even as millions of fans worldwide follow its solar-powered flight via social media and live updates, with the founders and sponsors hoping it will change aviation history.

Its predecessor, the Si1 which flew in 2010, holds eight world records.

The Si2's round-the-world flight took off from Abu Dhabi in UAE last week. After stopping in Muscat and Ahmedabad, it will go to Varanasi in India, Mandalay in Myanmar, Chongqing and Nanjing cities in China.

Then it will cross the Pacific Ocean via Hawaii Islands and fly across the US with stops in Phoenix city in the Midwest and New York.

From there it will cross the Atlantic Ocean and the final leg would include a stopover in southern Europe or north Africa before returning to the starting point in Abu Dhabi by late July.

Hyundai will always be close to my heart, says Shah Rukh Khan