The rarity of emeralds

It's the rarity of an emerald that makes finding and designing it an expensive art.

If you were given an hour and a half to look at a rock and find an emerald in it, could you do it?

Gemstone cutters from Jaipur have been doing this for generations and they could go through piles of such rocks in half that time. But these are no ordinary rocks and sourcing them is a challenge even for their expert eyes.

Pics: Emerald: From mines to market

Rough emeralds from Gem fields mine in Zambia
"Twenty years ago Africa was not open to traders like us from India. We had to travel to places like Geneva and Bangkok to buy our rough stones," he says. Today his quest for the perfect gemstones takes him across various countries where he negotiates prices with mine owners and brokers to cut the best deals. On an average, he travels for a week out of every month. But ever since March last year he has been able to conduct his searches minus the jet lag and without jumping between time zones. This is thanks to the rough emerald auctions being organized by Gemfields, a global gemstone mining company, in Jaipur.

The concept of auctioning gemstones is not new to this business. Samiullah has been recognized as the highest bidder at emerald auctions in India between 1998 and 2006. In 2006 he bid $3.3 million at an auction organized by the Zambian government. Incidentally, the rough emeralds at that auction were mined from what is today Gemfields' Kagem mine. Cabochon gemstones in a petri-dish at a workshop
Along with a continuous supply of rough stones, Gemfields has carved out a niche by creating unique system for grading its produce. Auctioneers get a grand total of five days to go through and finally narrow down on the stones they want to bid for. The rough emeralds, graded according to size and quality, are placed in different cubicles or tables for examination. The last three days of the auction is when bidders get really serious about the tables they want to buy off/from. This November auction saw bidders going through rough emeralds worth $ 3.3 million across 18 tables. There were two other tables dedicated to Brazilian rough emeralds also.

Through this organized auctioning process the company is getting better prices for its emeralds and buyers are reaping a higher yield on their purchase.

Gem cutters polish rough emeralds at a Jaipur workshop
This ideal business situation is of recent origin. Back in 2008-09, the company was spending 3 million dollars a month as its operational costs, with an average operational cost 90 cents a carat, and it was earning revenues of zero dollars a carat. At that point Gemfields had a 100 manpower cutting facility in Sitapura (Jaipur) and was looking at a vertical integration model including mining, cutting and polishing, marketing, retailing and then also getting into the jeweller business. The global economic meltdown in 2008-09 only made things worse. So it was in 2009 that the company totally revamped its board. People like Ian Harebottle, CEO Gemfields, Adrian Banks, Product Director Gemfields and Dev Shetty were brought in.

"We decided to stop the cash bleed," says Shetty. At that point the company had only $9 million in its bank account, zero sales and in Shetty's words "no where to go". A big emerald chunk being examined
By concentrating its efforts in mining the company managed to dig its way out of its grave and reduce operational costs to a million dollars a month. After braving strong criticisms from customers and critics who doubted the emerald-grading system proposed by Gemfields, the company retaliated by proving its success by its second auction in 2009. It cut down its Sitapura facility to ten gem cutters and focused on its mine to market strategy.

Since then Gemfield has carried out a total of eight auctions and its most successful one in Singapore in July 2011 earned it revenues of $31.6 million.

Gemfield's Kagem mine in Zambia, where most of these auction-emeralds come from, is owned 75 per cent by Gemfields and 25 per cent by the government of Zambia. For this mining company, like some many others, business goes hand-in-hand with politics.

"Last six months back we used to see political risks because there was an election in Zambia after a 20-year regime, so we were not sure whether it was going to continue or not. But a new government has just come and we are quite happy with them. That old political regime has gone," says Shetty. 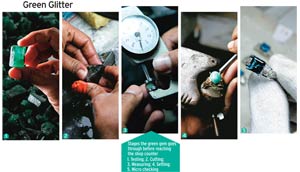 Click here to Enlarge
Despite the uncertainty Gemfields had a turnover of $40 million last financial year (FY June 2011) and is looking to have a 10-15 per cent year-on-year growth in production.

Shetty acknowledges recessionary risks and risks stemming from foreign exchange volatility. In a market where the price of an emerald is known to nobody, dollar-rupee volatility could drag on pricing.


"We did an auction in March this year when dollar to rupee exchange rate was 46, now it's 53.  If it starts going higher and higher, if it becomes 54-55, that's when it'll start getting more and more expensive. The way pricing model works people do factor in currency fluctuations in this market," says Shetty.


But pricing and demand, he says, is not something they are worried about. Gemfields recorded a 46% increase per carat price in its latest auction compared to its last one. It recorded revenues of $ 11.0 million for an auction of 9.8 million carats of rough emeralds mined at their Kagem mine in Zambia.


If these risks aren't enough of a hurdle then the sheer rarity of emeralds should explain why they are understood as being precious stones - to obtain one gram of emerald, 10 million grams of rock and waste has to be removed/shifted. This is an expensive proposition.  If they're lucky, five excavators and 15 dump trucks working for six months might come across a reaction zone that has emeralds. These reaction zones are a result of a 1.6 billion year old high grade metamorphic rock named the Talc Magnetite Schist (TMS) coming into contact with a younger 500 million year old rock type.

For Gemfields, its 8 million tonnes of rock handling in a year yields around 33 million carats of emerald.

While these auctions have seemingly sucked the adventure out of Samiullah's trade they have guaranteed him something substantially more profitable - a regular supply of rough emeralds.

NGOs to train their mid-level leaders in worldly skills