Business Today's Kushan Mitra was deputed to travel to Africa with a Ministry of External Affairs delegation and this is the second part of his report on the continent.

Business Today's Kushan Mitra was deputed to travel to Africa with a Ministry of External Affairs delegation and the continent left an indelible impression on him. He writes about his experiences. (This is the second part of his report on Africa. Click here for the first part)

Landing in South Africa felt like we had reached a different world after DR Congo. It really is not surprising that many people consider this country to be the southern-most part of Europe all the way down to the weather. In mid-April, the weather is a bit chilly up in Pretoria where we were going to stay for two days, and none of us had really planned for this weather coming from the heat of Delhi. A view from the room in Pretoria
After checking in at the very upmarket Sheraton in Pretoria, I found myself with a room having a view of the stunning Union Building which was designed by Sir Herbert Baker, a name familiar to any student of New Delhi as he was the man who along with Edwin Lutyens designed the heart of India's capital.

The Union Buildings at Pretoria have the same familiar look to them as the North and South Block complex in New Delhi and they house the South African Presidency. Dinner was great fun with our Deputy High Commissioner in Pretoria, Shambhu Kumaran, who I hope is still trying not to smoke.

The next day in the city, we had a host of governmental meetings, meeting Maite Nkoana-Mashaban, the South African Minister for International Relations and Cooperation, understanding regional issues in Southern Africa as well as South African views on the troubles in North Africa. South Africa had voted along with the US, Britain and France supporting intervention in Libya, though now they had some misgivings about the NATO mission there.

Afterwards we went to meet our High Commissioner in South Africa, the extremely erudite Vijender Gupta, who played the perfect host and while the adjective 'freewheeling' is much misused in journalism, it seems fairly appropriate here, though much of it was off the South African Foreign Minister Maite Nkoana-Mashaban
record. We had a quick pit-stop over at the Union Buildings, admiring them from a bit closer before heading for lunch and a post-lunch discussion with a group of academics at the University of South Africa. Our discussions were entertaining to say the least, though we did keep on getting side-tracked to Libya a fair bit.

Afterwards, at Shambhu's insistence, we were dispatched to Soweto where we went and saw Nelson Mandela's residence, where his wife Winnie Mandela held guard while the great leader was in prison. Winnie Mandela still stays in Soweto, which itself looks quite strange nowadays. It is not as poor as some say it is, and some areas look decidedly rich.

Then again, poverty is a relative thing, though there are many South Africans still below the poverty line and unemployed, possibly Kushan at the Union Buildings
driving the insane amount of crime in the country. As our Consul-General in Johannesburg, Vikram Doraiswamy, told me the next day, it is not just the crime, but the 'nature of the crime' that is unsettling. "You might be killed for just 50 Rand, that is what is disconcerting." South Africa residential complexes have nearly extreme levels of security. Incidentally, when Doraiswamy saw my card, he introduced himself as a one-time employee of Business Today, way back in 1992 before he cleared the Civil Services exam.

Dinner was hosted at the High Commissioner's residence, an exceedingly pretty house in the heart of Pretoria where several members of the diaspora had been invited. The conversations were interesting, made doubly so thanks to the whisky. Needless to say we slept well that night.

One tragedy of travelling on work is that one actually ends up having almost no time to oneself. Three days into my Africa trip and along with not having any time, my diet had gone for an utter toss and I was sampling all sorts of local brews, which along with the fact that I was missing going to the gym, made things even worse. So the next morning, I got up, packed and went to the gym. Which made me all the more hungry at breakfast, and five-star hotel breakfasts are something else and in a country where they love their red meat, positively unhealthy for the Indian stomach.

I skipped the other meetings in the morning as did Nidhi Razdan from NDTV who went to shoot Gandhiji's house in Johannesburg while I went to Centurion to meet Ashok Thakur, who heads Mahindra and Mahindra's local operation. On the way there we passed the famous cricket stadium in this suburban town between Pretoria and Jo'burg. Ashok and I had a great chat driving to Jo'burg for a lunch organised by the Indian Business Forum, a business lobby which in association with the Confederation of Indian Industry (CII) looks after Indian business interests in the country and region. There were representatives from several PSU Banks as well as private industry. 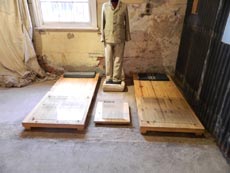 A sample bed and uniform that Gandhiji might have worn and slept in
After lunch, we said goodbye to Shambhu, who insisted on sending the men from the trip - Siddharth Varadrajan of The Hindu, Vijay Naik of Sakal and myself to Constitution Hill first. Despite the name, this is where Gandhiji was jailed for several years. Seeing the cell where the Father of our Nation was imprisoned a century ago was quite sobering. After that, our hosts at the High Commission had organised a night out at Sun City, familiar to viewers of the Miss World competition and South Africa's richest and most pretentious place all at once. The drive there was long, and made me thank Steve Jobs more than once for having made the iPod.

By the time we got to the resort, it was late and we almost immediately headed for dinner, but being a serial cards player on Diwali, I decided to hit the casino and headed straight for the Blackjack tables at the crowded and smoky playing area. Long story short, but I went in with around 500 Rand (Rs 3,500) and ended up winning 250 Rand, and a profit of 50 per cent is not bad. But I know when to call it quits and I did. And I had to since we would be heading to Pilanesburg National Park, which is beside the resort, early the next morning. 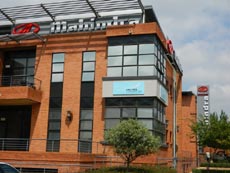 The Mahindra offices at Centurion
Waking up at six in the morning is a usual part of a journalist's life, usually when a flight is involved. But to go on a safari is a different thing, and much more exciting. Pilanesburg has some of the richest platinum and palladium mines in the world but the South Africans have managed to keep a pristine nature reserve right here. It is not as famous and nowhere as large as Kruger National Park but it was still quite spectacular. We did not get to see any lions, but we still saw wilderbeest, giraffes, zebras, white rhinos and African elephants, animals that I had previously only seen on Discovery and National Geographic in the wild.

Our safari was the highlight of our trip to South Africa, but now we were about to head to Maputo in Mozambique and for quite a few surprises.

A correspondent's tale of Africa

Tough days ahead for Jayalalithaa