Lok Sabha election 2019: Andhra Pradesh is poised to witness a multi-cornered fight with no major alliances on cards till now as the main parties, including ruling Telugu Desam Party (TDP) and main opposition YSR Congress, are expected to jump into the electoral battle on their own. 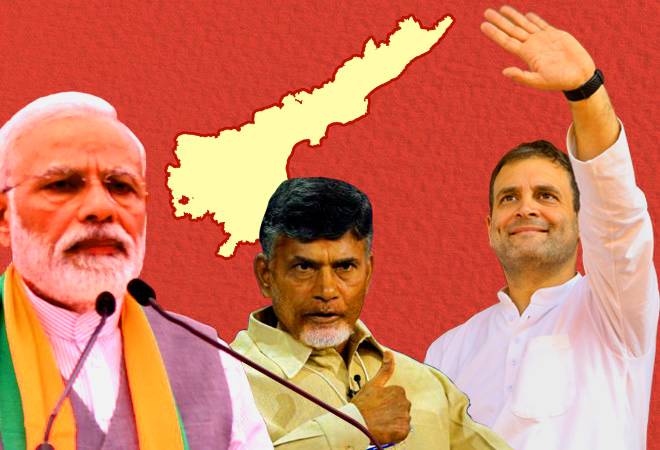 Both the Lok Sabha and Assembly elections are scheduled in Andhra Pradesh in single phase on April 11 for 175 assembly and 25 parliamentary constituencies.

Lok Sabha elections 2019, which will be held for 543 seats on nearly 10 lakh polling booths across the country, will start on April 11 and will be held in seven phases between April 11 and May 19. Results will be declared on May 23.

Both the Lok Sabha and Assembly elections are scheduled in Andhra Pradesh in single phase on April 11 for 175 assembly and 25 parliamentary constituencies. The State will hold Lok Sabha elections for the first time after it was bifurcated into Telangana and the Andhra Pradesh due to the Telangana movement.

The last general polls were held in 2014 in undivided Andhra Pradesh. Following the bifurcation of the State, 42 Lok Sabha seats were divided among Andhra Pradesh and Telangana, with the former getting 25 seats and the latter 17, respectively.

The state is poised to witness a multi-cornered fight with no major alliances on cards till now as the main parties, including ruling Telugu Desam Party (TDP) and main opposition YSR Congress, are expected to jump into the electoral battle on their own.

According to political analysts, the state will witness a three-pronged contest between N Chandrababu led-TDP, YSR Congress Party of YS Jaganmohan Reddy and movie star Pawan Kalyan's Jana Sena. The national parties, the Congress and the BJP, are just minor players in the State.

In 2014, N Chandrababu Naidu's TDP had an alliance with the BJP and the combined strength of the BJP-led NDA was 17 at that time, which helped him beat Jaganmohan Reddy to the chief ministerial office. The BJP-led NDA was supported by the Jana Sena Party of Telugu film star Pawan Kalyan, who did not contest from any seat.

In the last Assembly polls, the TDP had won 102 out of 175 seats, while YSRC had bagged 67, followed by BJP (4), Navodayam Party (1) and an independent one. TDP secured 44.61 per cent of vote share and its ally BJP held 2.18 per cent, which helped Chandrababu Naidu to clinch power. The YSR Congress Party obtained 44.58 per cent vote while the Congress, which ruled AP for 10 years from 2004, managed only 2.77 per cent votes.

Now, the equation has changed as TDP has broken its ties with the BJP while the Jana Sena is set to fight the elections for the first time in alliance with the BSP, CPI and the CPI-M. According to media report, the Jana Sena has allotted 3 Lok Sabha and 21 assembly seats to Mayawati-led Bahujan Samaj Party (BSP), while seat-sharing with the CPI and the CPI-M is yet to be finalised.

Jana Sena founder Pawan Kalyan will contest the Assembly elections from the Gajuwaka and Bhimavaram constituencies. Gajuwaka is in Visakhapatnam district and Bhimavaram in West Godavari.

According to a survey conducted by the Association for the Democratic Reforms (ADR), voters of Andhra Pradesh have rated the performance of the ruling N Chandrababu led-TDP government as "below average", citing that it failed to deliver key promises.

The survey, which covered 12,500 respondents across all 25 parliamentary constituencies of the state, revealed that major poll issues in the state were 'better employment opportunities', 'clean drinking water' and 'better hospitals or primary healthcare centres'.