Lok Sabha Election 2019: Why doesn't PM speak up when his party activists commit atrocities on Dalits like in Una, asks BSP supremo 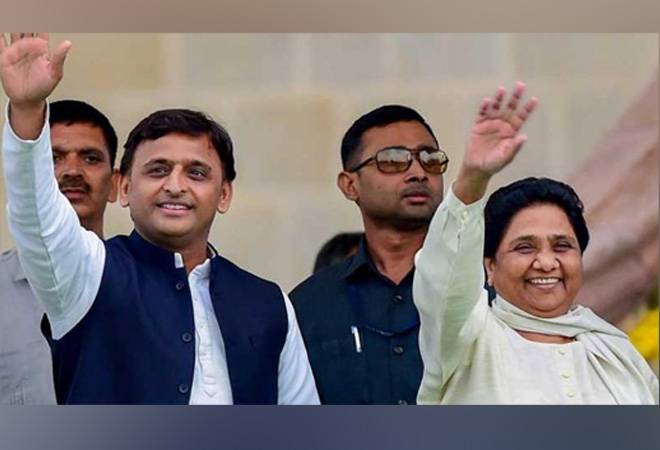 Phase 6 of the Lok Sabha Election 2019 concluded on Sunday with a voter turnout of 63.3 per cent. Elections were conducted across 59 parliamentary constituencies in seven states. The highest voter turnout was recorded in West Bengal with 80.35 percent, while Delhi recorded a low turnout of 59.74 per cent. Haryana, Uttar Pradesh, Bihar, Jharkhand and Madhya Pradesh recorded 68.17 per cent, 54.72 per cent, 59.29 per cent, 64.50 per cent and 64.55 per cent respectively.

At a rally in Basanti, West Bengal Mamata Banerjee attacked PM Modi and said that she will take revenge 'inch-by-inch'.

Meanwhile, the Election Commission issued a show cause notice to BJP's candidate from Begusarai Giriraj Singh for violating poll code.

9.40 PM: "The comments of the philosopher and guide of the Congress President (Sam Pitroda) have angered Punjab," says PM Modi.

The comments of the philosopher and guide of the Congress President have angered Punjab.

The memories of 1984 massacres haunt several people and our Government has worked towards ensuring justice by punishing the perpetrators. pic.twitter.com/GZIZN84NpE

9.33 PM: Priyanka Gandhi Vadra in Indore: "He (Modi) is such a defence expert that he himself decided who will manufacture planes, he decided those who have never made a plane in their lives will make it...he thought, weather is cloudy, it won't come on radar."

7.14 PM: "State leaders will be the heroes after #23May2019," says Saravanan Annadurai, DMK spokesperson.

Our leader @mkstalin persuades Telengana CM KCR to support the congress alliance in a crucial meeting today! #Elections2019 State leaders will be the heroes after #23May2019

7.11 PM: Tamil Nadu Minister KT Rajendra Balaji: "Kamal Haasan's tongue should be cut off for his remarks on Hindu terror."

Tamil Nadu Minister K.T. Rajendra Balaji: Kamal Haasan's tongue should be cut off for his remarks on Hindu terror. He made these remarks to gain votes of minorities. We can't blame entire community for act of 1 individual. EC should take action against the actor & ban his party. pic.twitter.com/2O3nypPOtu

6.50 PM: Akhilesh Yadav on who will be the next PM of India? "We (I and Mayawati) will sit together and make this choice after May 23, but yes we would like the next PM to be from UP." 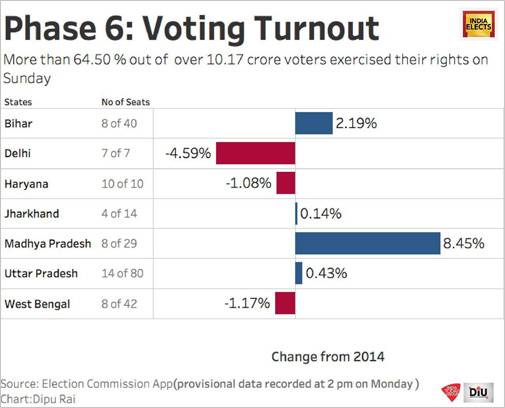 2.48 PM: Mayawati tells India Today: "My alliance with Akhilesh is here to stay. The Cong did not really want an alliance with me, see how they dealt with us in MP, Rajasthan and Chhattisgarh. Our sole aim is to remove the Modi government."

2.44 PM:Mayawati to India Today TV: "I have only responded to the personal attacks on me by Mr Modi; why doesn't PM speak up when his party activists commit atrocities on Dalits like in Una."

1:29pm: At a rally in Joynagar, BJP President Amit Shah said, "I was to visit 3 places today, but Mamata's ji's nephew is contesting from one of the seats so she is scared her nephew will lose, and that's why she cancelled the permission for our rally."

1:15pm: At a rally in Joynagar, BJP chief Amit Shah said, "In Bengal, Mamata didi does not allow the people to enjoy the benefits of any of Modi ji's schemes. This is because she thinks that if these schemes start here, he will become more popular than she is."

1:05pm: BSP supremo Mayawati said at a rally in Gorakhpur that those who chant Namo Namo will be defeated. She said, "After independence, the Congress party was in centre and most of the states for the longest time. However their bad policies and misgovernance has resulted in its debacle. The same condition will happen of the BJP. Chowkidaari is not going to help them."

12:55pm: Addressing an election rally in Khanna, Punjab, Captain Amrinder said, "Promise loan waiver in election manifesto besides jobs. We are committed for that. New industrial units in many parts will generate employment opportunities. We are giving plots and houses to the homeless."

12:20pm: Supreme Court vacation bench dismissed the petition filed by lawyer, Nizamuddin Pasha, challenging the ECI's decision refusing to reschedule voting commencement time from 7 am to 5 am for the last phase of voting to, 'ease difficulty for Muslims during the holy month of Ramzan'.

12:04pm: BJP MP Ananth Kumar Hegde said, "In one year we will have gram panchayat elections but before that, in June - July the suicidal coalition govt will take it's own course. There'll be fresh elections in Karnataka in August. Our MLA should win Karwar assembly seat."

12:15pm: A national traders' board will be set up for the businessmen of the nation, PM Modi said.

12:15pm: Taking at a dig at Congress leader Digvijay Singh's not casting his vote, PM Modi said, "Tomorrow their arrogance was seen in Bhopal too. I myself went tto Ahmedabad to cast my vote. The President and Vice President of the nation stood in queues to cast their ballot. And 'Diggy Raja' (Digvijay Singh) was not concerned about democracy or his responsibility as a voter."

12:00pm: Tamilisai Soundararajan calls Kamal Haasan's comments on Hindu terror political posturing. "Kamal Haasan has no right to call himself as great grandson of Mahatma Gandhi. It's a well known fact that Kamal has not led a disciplined life. What's the point in advising the world? Is it mere political posturing?"

11:55am: "The 'Naamdar' family of Congress uses a battleship for picnic and then shamelessly reply when questions are raised - what happened has happened," PM Modi said in Ratlam.

11:45am: Uttar Pradesh Deputy Chief Minister Dinesh Sharma said BSP president Mayawati is suffering from "political depression" as she fears defeat of her party's candidates in the general election under way and as a result, she is losing her temper and patience.

Sharma claimed Mayawati is showing weakness and her memory is fading.

"All these symptoms are clearly visible in the statements of the BSP supremo," he told PTI in an interview.

11:30am: Dharmendra said if he had known that Sunil Jakhar's son was Sunny Deol's opponent, he would not have allowed his son to contest.

11:15am: Amit Shah to hold rallies in Jaynagar and Barasat in West Bengal.

10:59am: DEO Faridabad has reported that a polling agent was arrested yesterday and FIR has been lodged. He was trying to effect at least 3 women voters. Observer visited the booth at Asawati in Prithla constituency of 10, Faridabad PC. He is satisfied that voting was never vitiated: ECI.

10:30am:  Election Commissioner Ashok Lavasa confirmed that the polling agent who was seen trying to influence voters inside a polling booth in Faridabad has been arrested. His actions were captured in a video. "DEO Faridabad reported that the observer, Sanjay Kumar investigated the entire matter. Report of the observer will be examined by ECI and action will be taken against those found wanting in their duty," Lavasa tweeted.

10:20am: Bhojpuri star and BJP candidate from Gorakhpur Ravi Kishan said that he will make Modi biopic in Bhojpuri. "I have several projects in mind, including Modiji's biopic in Bhojpuri, so that people get to know more about him. Apart from this, I am also planning to make biopics of Swami Vivekananda and Atal Bihari Vajpayee," Kishan told PTI.

10:17am: Congress leader Siddaramaiah called Narendra Modi a 'liar'. He said, "Indira Gandhi, Rajiv Gandhi and Gandhiji were killed. Was any BJP man killed for the sake of the country? Then where's the truth of calling themselves desh bhakt. Everything is just a lie , another name of Modi is liar."

10:13am: Kamal Haasan said at a rally in Tamil Nadu's Aravakurichi, "I am not saying this because this is a Muslim-dominated area, but I am saying this before a statue of Gandhi. Free India's first terrorist was a Hindu, his name was Nathuram Godse. There it (terrorism) started," he said. "Good Indians desire for equality and want the three colours in the tricolour to remain intact. I am a good Indian, will proudly proclaim that," he added.

10:10am: BSP supremo Mayawati said, "Narendra Modi was silent on Alwar gangrape case. He's trying to play dirty politics over it. So that in the elections his party can be benefited. It is extremely shameful. How can he respect others' sisters and wives when he has left his own wife for political gains?"

9:55am: "Congress leaders must stop their mischievous attitude. They must stop trying to sabotage coalition govt. They can do all this politics in 2022, this isn't the time. We had brought Siddaramaiah to Congress, we created situation that made him the CM," said Karnataka JDS leader H Vishwanath.

9:41am: According to BJP, party President Amit Shah was denied permission to hold rally as well as land chopper in Jadavpur.

9:40am: Himanta Biswa Sarma on BJP's youth wing worker Priyanka Sharma's arrest for sharing a morphed picture of Mamata Banerjee: If this continues, freedom of speech will not be left. BJP strongly condemns it. We will try to file an application in Supreme Court tomorrow.

9:30am: Addressing an election rally at West Bengal's Basanti, Chief Minister Mamata Banerjee attacked PM Modi and said, "One day will come when I will take revenge inch by inch, what you have showed today, you will see the same, you have insulted Bengal and me. I have tolerated it enough by not saying anything and showing decency. Don't take my decency as my weakness."