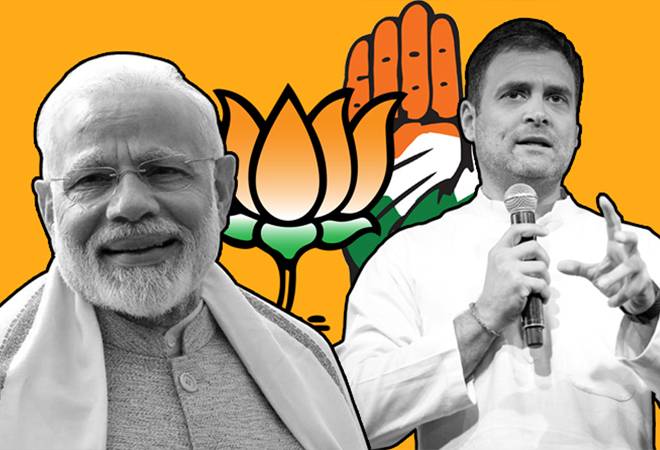 The Lok Sabha Elections 2019 concluded after the seventh phase on May 19. Following the wrap-up, exit polls predicted a landslide victory for the BJP-led NDA alliance. The India Today-Axis My India poll gave 339-365 seats to the BJP-led NDA. Meanwhile, the Congress-led UPA is expected to bag 77-108 seats and the SP-BSP-RLD combine might secure a victory on 10-16 seats. Others are likely to come on top in 59-79 seats, as per the exit poll.

5:30pm: Arun Jaitley: "If the Exit Polls are read alongwith the 2014 election results, it would be clear that there is a huge maturing of Indian democracy taking place."

5:15pm: Maharashtra State Commission for Woman plans to take action against actor Vivek Oberoi on his tweet on exit polls.(ANI)

4:25pm: "We would probably support some party or some kind of combination, whoever forms the govt at the Centre and agrees to settle some of the unsettled and long pending issues of Odisha," said Amar Patnaik of BJD.

Amar Patnaik, BJD: We would probably support some party or some kind of combination, whoever forms the govt at the Centre and agrees to settle some of the unsettled and long pending issues of Odisha. pic.twitter.com/YmqJaogvY4

3:20pm: Declaration of results for the Delhi Lok Sabha seats may get delayed by around five to six hours on May 23 as more time will be spent on counting VVPATs from each of the 70 Assembly segments of the national capital, Chief Electoral Officer Ranbir Singh has said.

He said after the Electronic Voting Machine (EVM) counting is over, the voter-verified paper audit trail (VVPATs) will be counted as per the Supreme Court guidelines.

On VVPATs & the EVM tally, the EC is yet to come out with a procedure in case there is a mismatch! Even if there is one mismatch in the VVPAT samples picked for counting and EVMs, to maintain integrity of the electoral process, all VVPATs in that assembly segment must be counted

2:00pm: Madhya Pradesh Leader of Opposition and BJP leader Gopal Bhargava reportedly said that they are sending a letter to Governor Anandiben Patel, claiming that Kamal Nath government is in minority. "We are sending a letter to the Governor requesting an assembly session as there are a lot of issues... It (the Madhya Pradesh government) will fall on its own. I don't believe in horse-trading but I feel its time has come and it will have to go soon," Bhargava was quoted as saying by news agency ANI.

Madhya Pradesh Leader of Opposition & BJP leader Gopal Bhargava: We are sending a letter to Governor requesting an assembly session as there are a lot of issues. pic.twitter.com/CXTwNLXYOM

1:50pm: "There are many problems in counting process. The EC should take steps to resolve all those problems. There are many rumours regarding EVMs, including that printers may be manipulated and that control panels will be changed. EC has given scope for suspicion," said Andhra Pradesh CM Chandrababu Naidu.

1:35pm: Andhra Pradesh CM N Chandrababu Naidu: I am 1000 per cent confident that TDP will win the elections. I don't have even 0.1 per cent doubt, we are going to win.

1:25pm: Madhya Pradesh Leader of Opposition & BJP leader Gopal Bhargava: It will fall on its own (MP Government), I don't believe in horse-trading but I feel its time has come and it will have to go soon.

1:15pm: Kerala Chief Minister Pinarayi Vijayan: We are going to win big. Sabarimala issue didn't affect polls in Kerala. All of us know who created troubles there.

1:01pm: HD Kumaraswamy further tweeted: The entire exit poll exercise was an effort to create false impression of a wave in favour of one particular leader and the party. As they say, it is just an exit poll, not exact poll.

Opposition parties even knocked the doors of the Supre Court asking for a traditional ballet paper elections to avoid defective EVMs that are vulnerable to fraud.

World wide, even developed countries have opted for traditional polls through paper ballets.

The exit poll surveys on May 19 only reiterated the serious concern of the Opposition parties on misuse of vulnerabke EVMs for electoral gains by the ruling party.
2/4

12:57pm: HD Kumaraswamy tweeted: Entire Opposition political parties had expressed concern over credibility of EVMs under PM @narendramodi's rule.  Opposition parties even knocked the doors of the Supre Court asking for a traditional ballet paper elections to avoid defective EVMs that are vulnerable to fraud.

12:55pm: Piyush Goyal met the EC and said, "We gave the Election Commission detailed information of the violence inflicted upon our workers. We reiterated our demand for re-poll for constituencies where violence occurred in 7th phase and earlier phases, particularly in West Bengal."

12:46pm: MK Stalin said, "We will see the results on May 23," addint Chandrababu Naidu had spoken to him several times. "He has also come here and expressed his thoughts at the DMK office," said Stalin.

12:44pm: Tamil Nadu Chief Minister Palaniswami slams exit polls results for Tamil Nadu and says that he does not agree that AIADMk will fare poorly.

Palaniswami says the exit polls are imposed on the people.

12:10pm: Ram Madhav, BJP National General Secretary, said, "Bengal will surprise all the pollsters, we are hoping to do extremely well there. Everyone has seen the tremendous outpouring of support for PM Modi and BJP in Bengal. What Uttar Pradesh was in 2014, Bengal will be in 2019."

12:00pm: The Shiv Sena on Monday hit out at the opposition parties for trying to come together to keep the BJP out of power after the Lok Sabha poll results, saying the country cannot afford to have a coalition government "crawling" with the support of several small outfits.

"The 'Mahagathbandhan' (proposed grand alliance of opposition parties) has at least five prime ministerial hopefuls...their hopes are likely to be dashed going by the current indications," the Sena said in an editorial in party mouthpiece 'Saamana'.

"The country cannot afford to have a coalition government crawling with the help of several small parties," it opined.

11:30am: EVMs and VVPATs brought to Lahaul and Spiti district headquarters.

10:43am: UP CM Adityanath seeks immediate sacking of Rajbhar, who had been making controversial remarks against BJP: Official.

10:40am: UP CM Yogi Adityanath recommends sacking of minister Om Prakash Rajbhar from his cabinet to governor: Official.

10:35am: Karnataka BJP president BS Yeddyurappa said, "When I said I'll win 22 seats in the state no one took me seriously. I am sure now media will understand. All surveys are saying the same, it's not a surprise if we win 22 seats. It's clear that some big names will see a setback."

10:21am:West Bengal exit poll 2019 - In an unexpected turn of events, the BJP could secure 19-23 Lok Sabha seats out of 42 here, according to India Today-Axis My India exit poll results.

10:10am: Andhra Pradesh Chief Minister Chandrababu Naidu will in Delhi on Monday evening and is expected to meet all the available gathbandhan leaders.

This will be his first meeting with the opposition leaders after exit polls that predicted a clear majority to BJP-led NDA.

9:51am: The turnout of women exceeded that of men in at least nine states and Union Territories, with the highest in Manipur at 84.16% and Meghalaya at 73.64%, followed by Arunachal Pradesh, Kerala, Dadra and Nagar Haveli, Uttarakhand, Goa, Mizoram and Lakshadweep.

9:50am: The highest voter jump came from women voters, upto 6th phase an additional 4.1 crore women had voted with the gender gap coming down with every Lok Sabha election. Gender gap in 2009 was 9%, it was 1.4% in 2014 and this election season it came down to 0.4%, these figures were read out by Deputy Election Commissioner Sandeep Saxena.

9:40am: BSP leader SC Mishra to ANI: "Mayawati ji has no programme or meetings scheduled in Delhi today, she will be in Lucknow."

9:30am: Following the exit polls verdict, Congress spokesman Rajeev Gowda said, "Please wait till May 23. We will surprise you. The entire vote share to seat share conversion is a difficult job. There is also a fear psychosis in the country and people do not reveal their views."