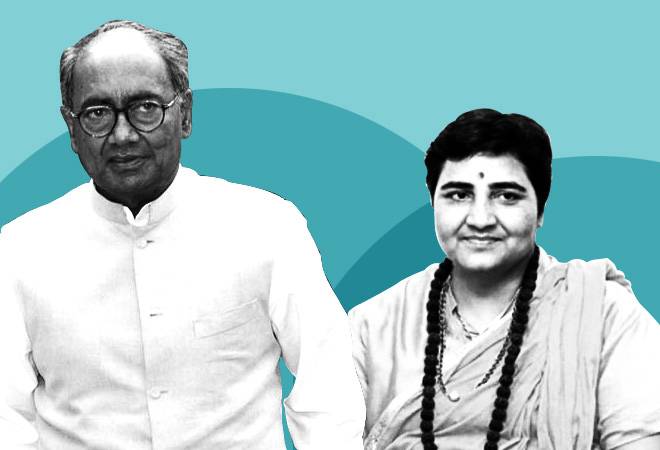 BJP candidate Pragya Singh Thakur is ahead in the race from the high-profile seat of Bhopal, while the 'Raja of Rahogarh', Digvijaya Singh, is trailing behind. Bhopal Lok Sabha constituency went to polls in the penultimate phase 6 on May 12. The Lok Sabha constituency comprises eight Assembly seats, five of which were won by the Bharatiya Janata Party (BJP) in the last Assembly elections. Hoping to win the seat, the Congress party had fielded former two times chief minister of Madhya Pradesh and senior Congress leader, Digvijaya Singh, from Bhopal. But the BJP's decision to give the ticket to Sadhvi Pragya, an accused in the 2008 Malegaon blast case, changed the whole political equation for the Congress.

While the BJP projected her candidature as an answer to the Congress' "minority appeasement" politics, the Congress tried its best to project Singh as a pro-Hindu candidate. Knowing well that any statement against Sadhvi Pragya and her Hindu credentials could hurt his prospects in the RSS-dominated seat, Singh avoided taking any pot shots at her and talked about 'Ganga-Jamuni tehzeeb'.

However, the BJP successfully made it a pro-Hindu vs pro-Muslim election in Bhopal. "Pragya Thakur's candidature is a satyagraha against a fake case of fake bhagwa (saffron) terror. I want to ask Congress, some people were earlier arrested in 'Samjhauta Express' who were related to LeT (Lashkar-e-Toiba). A fake case of "bhagwa terror" was made in which the accused have been acquitted," BJP President Amit Shah said during a May 17 press conference that was also attended by Prime Minister Narendra Modi.

During the poll campaigning, the BJP blamed Digvijaya Singh for inventing the term 'Hindu terror'. Singh had actively spoken against the RSS, Sadhvi Pragya and Lt Col Shrikant Purohit after they were named in the Malegaon blast. Bhopal as a Lok Sabha seat has always been a BJP stronghold. The party has won 12 of the total 16 Lok Sabha elections held from the seat. The seat has always gone to the BJP's kitty since 1989.

Digvijaya Singh had first faced the biggest defeat at the hands of the Uma Bharti-led BJP in the 2003 Assembly elections when he was the MP CM. The BJP had then emerged victorious on 173 out of 230 seats in MP. Singh is contesting the Lok Sabha polls 2019 for the first time since 1993. There are total 19.5 lakh voters in Bhopal Lok Sabha constituency, of which 4.5 lakh are Muslims. From projecting herself as a victim of Congress' minority appeasement policy to a strong Hindu proponent, Sadvhi Pragya Thakur's had used every trick in the book to woo voters.