Scepticism ran high within and outside Ford when William Clay Ford appointed ALAN MULALLY — President and CEO, Boeing Commercial Airplanes—the President and CEO of the ailing carmaker in September 2006. “What does an airplane guy know about cars?” people wondered. Three years down the line, his coming on board appears to be the best thing that could have happened to Ford.

By moving quickly, Mulally raised $23.5 billion (when the financial markets were still robust) to fund the restructuring plan that included matching production and demand, striking an important wage deal with the unions and investing in new products. 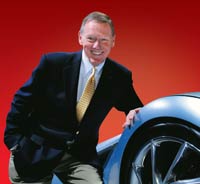 He also sold marquee brands such as Aston Martin, Land Rover, Jaguar and pared Ford’s stake in Mazda. These actions ensured that Ford—unlike its Detroit rivals—did not have to suffer the ignominy of dipping into federal funds for survival after the global markets collapsed following the bankruptcy of Lehman Brothers in September last year. His informal candour and easy-going nature hide a shrewd brain.

Your testimony before the Senate Committee. It was one hell of a confession...
(Laughs) It was the second testimony and I had five minutes of uninterrupted time to describe Ford’s entire transformation. Henry Ford had a vision of safe, efficient and affordable transportation for everybody.

He wanted Ford to operate all around the world by creating strong businesses and great vehicles in every country. So when I walked in, Ford was everywhere but what he (Henry Ford) did not imagine was that they (businesses in different countries) would work very independently and not really collaborate.

Ford also had many brands. We were kind of known as “a house of brands”. We had purchased Jaguar, Land Rover, Aston Martin, Volvo, Mazda and, of course, we had the Ford brand, too. You can imagine how difficult it is to be world class in all of those simultaneously. We were also losing money and given all the complexities, there were not enough actions in place to turn the company around.

On the other side was the phenomenal loyalty and goodwill to Ford. We made the #1 selling trucks in the US for 34 years. We made great cars in India, Asia-Pacific and Europe, which the Americans have never seen because we just did not make cars here. So, we had a lot of strengths but a couple of very real opportunities.

What Praful Patel said in 2009 on AI-IA merger

"Indian companies need to develop a pool of leaders"