Shinzo Nakanishi, Managing Director, Maruti Suzuki India (MSIL), has been an employee of Suzuki Motor Company for the past 25 years. With the industry facing flagging demand, thanks to economic downturn and increased competition, Nakanishi today faces his toughest challenge yet. He speaks to BT’s Kushan Mitra as MSIL prepares to launch the ‘Ritz’, its seventh product in the small car segment. Excerpts: 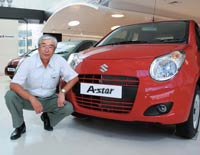 Shinzo Nakanishi, MD, Maruti Suzuki India
Shinzo Nakanishi, Managing Director, Maruti Suzuki India (MSIL), has been an employee of Suzuki Motor Company for the past 25 years. He is no novice to India either, having spent almost a decade in the country, performing several roles at MSIL, India’s largest carmaker. But with the industry facing flagging demand, thanks to economic downturn and increased competition, Nakanishi today faces his toughest challenge yet. He speaks to BT’s Kushan Mitra as MSIL prepares to launch the ‘Ritz’, its seventh product in the small car segment. Excerpts:

Q. Maruti is set to make a million vehicles this fiscal. How have things changed in the past two decades?
A. Twenty-five years ago, I was just a junior engineer coordinating between Suzuki and the government. We had no idea whether the venture would do well, let alone come to a point of time when we make a million units in a year.

Q. You may make a million cars, but won’t it be a challenge to sell a million cars?
A. Definitely. The Indian market has been weak, though sales in the first four months of 2009 have been decent, and even up slightly on last year. However, the big test for the industry will be in the second-half. If banks start lending again, things should look up, and that will be good for the economy on the whole.

Q. But a lot of your production will be exported as well?
A. Yes, our A-Star, which is called the Alto in European markets, will be made exclusively in India for Suzuki’s global markets. This year, we plan to increase our exports significantly from the 50,000 cars we sent out last year. The Manesar plant and A-Star production is running at full steam.

Q. Even with domestic sales, you spent an additional Rs 140 crore on discounts in 2008-09 compared to the last fiscal. Why is there such rampant discounting in the industry?
A. We have to offer discounts because our competitors do the same. One competitor is offering cars at Rs 50,000 discounts, and such offers tempt people even if our products have better resale and engineering values. Plus, with our range of cars in the small car segment, we can’t expect every model to do spectacularly well. The Swift and the WagonR are very successful, the Zen Estilo less so. Also, when times get difficult, you need to get people inside the showroom, and discounts are a way of doing that. That said, on popular models, such as the Swift Dzire, there are no discounts.

Q. Will it be a challenge for you to maintain the 50 per cent-plus market share that you enjoyed for years?
A. (Laughs) Obviously we would like our share to stay at that level, but who knows how the market will evolve. We are yet to see the impact of the Tata Nano. If it takes off or if people move away from small cars en masse, the market can explode and our share will come down. That said, we have planned our growth in such a way that we feel we will be able to maintain our lead.

Q. Even with new competition entering the small car segment?
A. We have one massive advantage over all our competitors— our sales and service network that touches almost 3,000 points across the length and breadth of the country. That coupled with innovative ideas such as ‘Maruti True Value’ second-hand cars to keep buyers in the Maruti family, have also helped. I am sure competition will come and I am sure they will try to eat into our share, but they will not be able to match our network.

Q. According to what Osamu Suzuki (Suzuki Motor Corporation Chairman) said, there was to be Rs 9,000 crore invested in MSIL. Much of that capital expenditure has already been spent, so how will the future expansion happen?
A. Well, I don’t know “when” the expansion will happen, but today our plants are running over their rated capacity. Gurgaon has a capacity of 600,000 units and Manesar 300,000 units, yet we will make a million units. At our Manesar plant, there is space enough to build a parallel plant. We will need to enhance our capacity to touch 1.5 million or two million and it is only a question of time.

Q. But you will consider more investments?
A. I believe India is a growing market and while only 1.6 million cars were sold last year, this number can easily climb. Look at China. A decade ago, it sold around a million cars every year. Today, they sell 7-8 million. There is no reason to think India won’t achieve such numbers as well. We will try our utmost to remain market leader even then.

Q. Apart from the Manesar plant, where else have you made significant investments?
A. The second really important investment has been in our KB-series engine plant, which makes engines for the A-Star and now for the new Ritz. These modern engines are far more fuel economic than the engines we had previously. We have also made significant modifications to our Gurgaon plant, particularly for the Ritz, with new welding bays and line modifications.

Q. After crossing the million-mark this year, what is the next step for Maruti?
A. I really hope one day Maruti designs its own cars. We have taken baby steps, like designing the rear-end of the Swift Dzire and our engineers have worked with Suzuki engineers in Japan on the Swift, A-Star and Ritz. Engine work will still need to be shared globally and initially even the platform can be borrowed.

But I want to see an Indian car designed by Indians at Maruti. This will take some time, maybe 3-5 years and we will also need to bolster our engineering staff. We have around 700 people today. We will need to take that number to at least 1,000. But I am sure that we will manage to do it.

Q. One last question, who names your cars? Ritz, A-Star, Dzire...
A. As far as Ritz is concerned, it will be known as ‘Splash’ globally. Unfortunately that name was already trademarked for the auto sector in India and the holder refused our entreaties. That is why the name Ritz came about. All names anyway are decided by a committee, not by me alone.

'We are taking our India lessons outside'