Praful Patel says the merger of two commercial firms, Indian Airlines and Air India, has not gone too well with people. 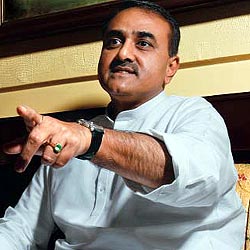 He was the toast of the media in his first stint as the Civil Aviation Minister in the previous UPA government and for good reasons. He presided over an industry that not only grew 30 per cent each year between 2005-06 and 2007-08, but also witnessed unprecedented expansion, thanks to the opening up and deregulation of the sector and ensuing competition. But today, PRAFUL PATEL is a man under attack, from Air India's employees, from rival politicians and by the media at large. Business Today's KUSHAN MITRA caught up with him as he took a break from the Monsoon Session of Parliament to get his side of the story. Here are the excerpts:

Your second term has begun with a rather bumpy ride.
My second term has just begun and this is just some take-off turbulence before we set course on a smooth flight (laughs). The crisis in aviation is not just a domestic phenomenon. It is linked to the global slowdown and the dramatic run on fuel prices last year. The last few years saw growth of 30 per cent plus. If the last year has seen negative growth, then all airlines will be affected and Air India will be affected even more. This is due to the inefficiencies in Air India and systemic issues, which are possibly unique to Air India in the Indian context.

Can you explain the future path for the airline?
The plan is to restructure Air India. If we have to restructure the airline, not everyone can work for the core function of the airline, so they will need to be hived off. Because you are not sacking people, you have to redeploy people in a way that brings more money to the airline or helps its bottom-line. Operations like cargo and ground handling and maintenance (MRO) can bring in additional revenue from other carriers also and can help in the redeployment of people.

You have also said on record the government will not sell Air India?
I have said that, but that will not stop us from thinking of diluting our stake in the airline while still retaining its public sector character.

So, like the Finance Minister said, you could divest 49 per cent of Air India?
Yes, it can be done.

So, the hived-off parts can be sold separately?
(Nods)

Wearing your hat as a businessman, can you tell us what went wrong?
You have to remember that Air India had virtually no assets to write off. They bought planes in the late '80s and early '90s, which were totally written off. Revenues came in and went into operation. Both Air India and Indian Airlines were in a complete monopoly situation. And even after the monopoly goes, it takes a lot longer for the mindset to change. They never really understood competition and deregulation because that was the way the company was structured from within.

Reports have emerged that Air India might cancel some of the remaining aircraft on order...
Of the 111 aircraft ordered (43 Airbuses and 68 Boeings), 51 have already arrived and the bulk of the large planes are yet to come. What I have said is that Air India could, as part of its restructuring, stretch the induction of new aircraft over a longer period of time. To say that Air India should not function with these new planes is ridiculous, and the people who are talking like this are not running the airline.

Do you feel in retrospect that there was too much exuberance by operators in 2006-2008?
There was exuberance worldwide in aviation, not just in India. But it was also matched by growth. And honestly, despite all that we have talked about, I feel that just 350 aircraft in Indian skies is still not enough for a country of our size and geography. There will still be a lot of growth.

There have been accusations that you have allowed international carriers to prosper at the cost of Indian carriers, read Air India.
There is an increased demand for connectivity from our country. If Indians are to have a better choice, better services and better fares, then competition is the order of the day. If Emirates, Qatar (Airways), Singapore (Airlines), British Airways, Lufthansa or any other airline is allowed to operate more services into India, so are Indian carriers allowed to operate more services into those countries.

But some people like to spread the myth that while some international carriers fly into 15 cities of India, we fly into only one city of theirs. We also have 15 cities to fly from, don't we? These allegations are of no use. Is the future of civil aviation in India linked only to Air India? If that's so, then this argument of opening up routes and deregulation falls flat, doesn't it?

Five years ago, journalists were asking why weren't more foreign carriers being allowed into India. Now when we have allowed, it is alleged that I am destroying Air India. Listen, I don't care much for allegations. Allegations should be substantiated with evidence that the country has lost something.

But you did open up routes to private Indian carriers?
Yes, but three years after opening them up, have they done anything...?

But Jet (Airways) is expanding in the Gulf...
Jet may have done a few flights, but Jet and Air India are Indian carriers and have they really done much? Tomorrow, if foreign carriers are allowed to invest in Indian carriers, people will accuse me of allowing this so as to destroy Air India. Today, you guys (the media) are saying that this should be done; editorials are being written in the papers saying that we should. The moment we allow this, they will all say, Yeh toh Air India ko marne ke liye aapne kar diya!

Well, will you allow foreign carriers to invest in Indian carriers? Is this on the cards?
This is not a decision for me to take, but a larger government decision. At the end of the day, you have to ask the question: Is aviation in India about the country's interest or Air India's interest? I said this in Parliament, we are sitting here to look after the interest of the country's civil aviation and not just of Air India.

Now if Air India can't take advantage of a bilateral arrangement and routes are passed on to Jet and Kingfisher, people will say that everything is being given to Jet and Kingfisher in order to finish off Air India. You have to understand this in perspective. India has grown and aviation has grown and Air India is only one of the many components of the growth story of aviation in India.

As for Air India, you have the full support of the Prime Minister?
Yes, we do. But Air India is not asking for Rs 15,000 crore. I have no clue where this figure has come from. The total debt is Rs 15,000 crore. Even a healthy and profitable company runs debt. Air India has said that it needs an injection of equity. I have been talking of this for over two years. Is it something new that I have asked for? No.

That is why the whole focus of the media is ridiculous. What the media should have done is to have taken Air India to task. After everything has been done to support the airline, why hasn't it been able to turn itself around? Whatever is wrong with Air India is within itself, not outside.

Are there going to be more new airports coming up in India?
There is certainly going to be (an airport at) Navi Mumbai as and when it comes up. Pune, Kannoor, Goa, whenever these airports get the go-ahead, they will be in the private sector. At Nagpur, it will be a joint venture between AAI and MIDC (Maharashtra Industrial Development Corporation). Some of the new AAI airports have come online: Amritsar, Jaipur, Udaipur, Trichy, Madurai and Dibrugarh are looking very good. People keep telling me this, but no one writes about this.

Coming to the Mumbai airport, the slums are still creating a problem...
A lot of redevelopment work is being carried out. New tenements are being built, 25,000 of them. This is not just the work of the Civil Aviation Ministry or the airport developer; this has to be kept in objectivity.

As for Navi Mumbai, Jairam Ramesh (Environment Minister) has said there are some issues...
I don't want to comment on this other than to say that if a second airport doesn't come up in Mumbai, people can't just question me. You people lose objectivity. I should also change. I don't have to be objective anymore. I should also espouse negativity, be cynical. You people (the media) like sinister characters. Maybe I should become one.

What about aspects such as Air Traffic Control? There was the serious incident in Mumbai with the President's entourage...
There is a need for improvement, I won't deny that. But to say things are hopeless is extremely unfair. Yes, things can improve and efficiencies can be brought in.