A house for code jocks

Eighteen months ago, K. Ravi Shankar, CEO, Forbes Technosys, found himself stuck in a serpentine traffic jam on Bangalore’s arterial Mahatma Gandhi Road, as he tried in vain to rush to an important business meeting. Table football
It was late in the evening. On one side, an amalgam of office workers was northbound to their homes in far-flung suburbs and on the other, Shankar found himself enmeshed with hundreds of people similarly trying to scramble to their destinations. After struggling for what seemed an eternity (in reality, it was closer to an hour), he managed to squeeze his way to 13th Floor, a trendy nightspot to meet a handful of friends and business acquaintances. Their agenda: to try and devise a business model to ease the infrastructure ills faced by the mushrooming city IT industry.

Shankar and his motley crew were staring at a lucrative business opportunity in what had become an enormous problem for Bangalore. They threw around several ideas; some of them considered starting public transport initiatives and others considered tinkering with existing roadways to smooth the travel to and from the dozens of swish IT campuses around Bangalore.

While massive campuses abound across the city, housing an estimated 250,000 coders and BPO agents, the companies rely on a growing number of taxis, buses and vans to ferry them to and from work. One of the largest transporters, SRS Travels, for example, has 3,000 vehicles, most of which are dedicated to customers like Infosys and Wipro. “We realised that productivity was getting reduced as people spent at least three to four hours in a cab reaching work and getting back home. There had to be some place closer for them,” explains Shankar. Ergo, germinated the idea of single’s accommodation for these employees.

As a first step, Shankar linked up with some of his long-time associates; Umashankar Vishwanath, a 22-year veteran with companies such as HLL, Wipro and Tata, and Mathew Chacko, a hospitality sector specialist. While the idea was to meet the housing needs of techies across the IT companies, it was easier said than done. For starters, the trio (backed by angel investors M.J. Aravind and Amit Shah of Artiman Ventures, the former also a cofounder of Daksh), spent weeks looking for the ideal patch of land. Initially, they focussed on Bangalore’s Outer Ring Road, to attract companies in the Whitefield and Hosur Road area, but quickly realised they needed two units to meet this massive demand. Instead, Shankar and Co. settled on a 12-acre plot, a short drive from Electronics City, home to companies such as Infosys, Wipro and HP. It took over 12 months, working 24/7, for Woodstock Ambience, as this facility was named, to be ready in September 2007. Interactions are welcome
As one of the founders of Daksh, a BPO that was later sold to IBM, angel investor Aravind knows first hand, the pain companies in this field (and others such as IT, retail, hospitality, civil aviation and even healthcare) go through ferrying thousands of people to and from work. “We struggled to find housing for our young staff in Daksh; some places took hours to reach and some girls lived on narrow streets in semirural areas, where our vehicles couldn’t even reach,” he says. Most of the housing built by large realtors is two- or three-bedroom flats and houses, which are more suited to middle management, says Aravind, adding, “the young workforce, which comprises 70-75 per cent of the industry is left to fend for itself.”

By the time Woodstock Ambience was conceptualised and built, Bangalore had grown into a bustling metropolis of nearly eight million inhabitants and the IT industry had up to 100,000 vehicles on the road. Techies of all ages and designations were beginning to queue up and Shankar had to open early as one of his first customers, Wipro Technologies, turned up the heat.

Woodstock Ambience has 543 rooms (and is still under final stages of construction), with around 64 rooms per block. Much like a comfortable hotel room, each unit comes with two beds (or one queen size bed), an en suite bathroom and some basic linen. Mod-cons such as air-conditioning and TV are optional extras and the entire campus is Wi-Fi-enabled. Food is taken care of with a multi-cuisine cafeteria, with a few flat screen TVs providing entertainment while the residents grab a bite. All this at Rs 5,000 and Rs 10,000 for twinsharing and single occupancy, respectively. “We’re currently experimenting with our pricing model and could increase or decrease rates as we streamline our processes,” says Shankar.

Strolling into the cafeteria in a bright red T-shirt, blue shorts and slippers, Amit Sharma of HP is perhaps a typical resident of Woodstock Ambience. A recent migrant to Bangalore from Delhi, Sharma looked around the usual localities where many of his colleagues live, but discovered that rents were high, landlords unreasonable and accommodation barely liveable. Woodstock Ambience
Another resident, Bharat Kumar of Infosys Technologies, points out: “Most landlords demand Rs 60,000-Rs 1 lakh in advance and freshers initially can’t afford such a large sum and if they need to move out, often struggle to wrench the money back.”

There are other concerns too, especially for women working in the IT-BPO industries, primarily around the area of safety and transport. “These are a problem for me. I want to return to a secure place, where I can walk in at odd hours,” says Jaya Philip of Infosys Technologies.

Rather than work with individuals, Woodstock Ambience prefers to tie up with companies for long-stay (11 months or more) for its employees and counts firms like Infosys, Wipro, HCL and Satyam among its growing roster of customers. “Woodstock Ambience is important to help us attract out-of-town talent and to curb our (soaring) travel costs,” says an Infosys BPO spokesperson. 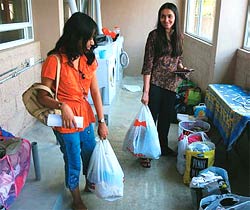 Laundry service at Woodstock Ambience
The firm is among the largest users, with around 200 people booked into the facility. Currently, there is 10 to 15 per cent of the room inventory that’s available and Shankar says this is a buffer he is willing to keep. Besides the booming IT and BPO industries, Woodstock Ambience has Kingfisher Airlines, housing its hostesses and ground staff at this facility. “There are other industries like retail or even resident doctors, who work odd hours, who could benefit from clean and safe singles housing,” says Aravind. While the final stage of the first Rs 40-crore project is underway, the founders see this project only as a test lab and believe that the success lies in replicating this model countrywide and tweaking some pieces to suit different industries.

“Young executives in the retail industry may not be able to pay this much for accommodation. We may need to provide them with a stripped-down version and charge them less,” says Shankar. 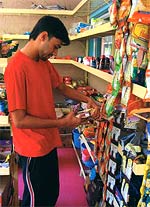 A daily-needs store
Despite the obvious target market, there are several hurdles that Shankar and his team have faced (and will now encounter) as they steer Woodstock Ambience’s growth. Real estate prices across metro cities have been rising exponentially in the last five years and despite some signs of slowing, show few signs of dropping significantly. At Whitefield, the proposed location for the second unit, rentals have dropped 20 per cent or more in the last 12 months, but land prices continue to rise. K. Ravi Shankar
Then input costs such as steel and cement have also been on the rise, resulting in much higher overall costs. And, any large realtor will tell you just how hard it is to find clean title deeds for large tracts of land on the periphery of large metro cities. “There are many variables where we have little or no control,” admits Aravind. Meanwhile, as the global slowdown begins to worsen, critics argue that higher realisations from IT companies (in terms of room rent or longer-term contracts) could decelerate or stop, as they begin to clamp down on their spending.

However, the last few weeks have been an endless stream of back-to-back meetings for Shankar. He is for now focussed on finding land and rapidly scaling up his business. Construction on the second unit is expected to start soon in Bangalore and he is set to follow the growth of Indian IT into other cities like Chennai and Hyderabad and, could begin looking for funding to fuel his ambitions. “We want to be in another five or six cities in the next 18 to 24 months,” says a confident Shankar. He sure seems to have hit a home run with Woodstock Ambience.

The merchants of nectar