Home
Business Today
BACK OF THE BOOK
August 24, 2008
Story

The entry of large oil and gas companies is changing this desert district in Rajasthan and promising its people a better life. Barmer's economy seems to be thriving. Kapil Bajaj reports.

In water-starved, sparsely populated Barmer, one of the five Rajasthan districts that fall in the Thar Desert, land would be the last thing to quarrel over, one would have thought. Control of land and what lies beneath it, however, seems to have become the cause celebre in the border district, much in line with the way industrialisation is forcing itself on to rural areas elsewhere in the country. That's happening even as industrial investments, especially following the discovery of oil and gas in Barmer, promises to transform the local economy, which has long suffered from the harshness of the desert. 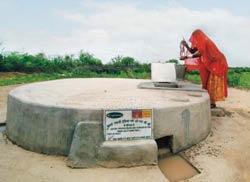 A tanka sponsored by Cairn
Oil will flow from Barmer in mid-2009 but it is already fuelling action in the district. Sample this:

A wellhead at an oilfield
The contrast between the old and the new economy in Barmer could not have been starker, and often manifests itself in huge stresses and strains. “Around 90 per cent of Barmer’s population is rural in nature and about 73 per cent of land is used for agriculture, even though farmers don’t expect anything more than a harvest in a year if the rains oblige,” says Lata Kachhawaha, Joint Secretary, SURE, an NGO employing community-based solutions to uplift the local economy.

Livelihoods are supplemented by animal husbandry, handicrafts, and men taking up any work that comes their way. Some of the local industries (in the small-scale sector) listed by the state government are Bentonite grinding, cement bricks, flour mills, granite cutting and polishing, and plaster of Paris. Cairn India promotes local handicrafts
The backwardness of the district is evident in high illiteracy, strong caste divisions—Bhils, Meenas and Grassias are three of the most marginalised groups—and a general lack of transportation and communications facilities across small, difficult-to-reach dhanis (very small rural habitations of generally kachcha houses that tend to be caste-exclusive).

Rainfall being deficient, Barmer relies on government water supply— tanks located along roads and fed with piped water—and tankas (rainwater harvesting structures built for an individual family or one or more dhanis), which still entail an onerous effort for women to carry water home. Electricity has not reached most of these villages.

The economy of Barmer town, on the other hand, seems to be thriving, thanks not only to the spin-offs from the fledgling of oil and gas industry, but also due to sustained efforts to leverage local strengths in handicrafts and animal husbandry. Dialing into change: A self-help group in Bhato Ka Dher
In Barmer town, this writer sees marketplaces doing brisk business in cell phones, apparel, and other merchandise. Cairn India’s fleet of Toyota Innovas stands outside Hotel Kailash International, whose unpainted façade hides a comfortable accommodation with all modern amenities that one can expect in big cities (including the luxury of tap water, which the rural population can only dream of).

“Three years ago, there used to be just one hotel in Barmer town. Today there are 6-7 hotels with high occupancy,” says a spokesperson for Cairn India, which expects its Mangla fields in Barmer to start yielding oil by the next year. Ravi Jain, District Collector of Barmer, says that the big industries have been instrumental in the growth of services like tourism, hotels, transportation and communication in the district.

As industrial capital exerts its influence over the age-old economy of Barmer, the locals are learning new skills and brushing up on old ones. Cairn India, for example, has set up an Enterprise Centre in collaboration with International Finance Corporation (IFC) and International Centre for Entrepreneur and Career Development (ICECD, the NGO implementer), training local youth in masonry, fabrication, carpentry, electricals, plumbing, and even repairing of mobile phones and automobiles. The primary objective of the initiative is to help the project-affected families (families that have lost their land) improve their employability.

Saras van collecting milk
Under the IFC-Cairn India Linkage Programme, the company has also got SURE to set up 13 village-level milk cooperatives with 765 members. The main buyer of their daily production of 1,250 litre milk is Rajasthan Cooperative Dairy Federation (better known by its Saras brand).

At the office of Rawlinadi Milk Cooperative, which also acts as a milk collection centre, with a solar battery charged-computer and a machine to measure milk fat, Govardhan Ram, a member, says: “The cooperative enables us to conveniently get the feed and medicine for our cattle. Payments are better and timely too.”

Manvendra Singh: Raised voice against displacing 40,000 people
At Barmer District Milk Producers’ Cooperative (an arm of Saras), Managing Director S.L. Mathur says milk cooperatives have been a huge support for the rural population of Barmer, which continues to depend on nature for its livelihood. The district boasts of 290 cooperatives with 14,000 members, and production of 25,000 litres of milk a day.

Ashok Sharda, a larger trader in handloom home linen, says his weekly payments to artisan-suppliers in Barmer have been over Rs 1 lakh. Fabindia, the Delhibased retailer, also sources over Rs 15-20 lakh worth of handicrafts every month from Barmer, which it’s trying to increase, says D.K. Sharma of Desert Artisans-Jodhpur, Fabindia’s sourcing arm in the area.

A tale of two worlds

Ravi Jain: Big industry is spurring tourism and communication
While livelihood promotion schemes in Barmer are getting some corporate support, local businesses, too, are eyeing large contracts for small shares. J.P. Singhal, the owner of a local construction firm, has bagged an Rs 4 crore order from L&T, which is implementing a Rs 1,300-crore turnkey contract for Cairn India. Singhal, however, is not happy: “Cairn’s presence has been good for the local economy but they are mainly giving orders to and sourcing from contractors outside Barmer—even for small items like water bottles and stationery. That’s unfair to us,” he says. The Cairn’s spokesperson says many local contractors are not prepared to adhere to the company’s environmental and safety norms, resulting in contracts going to outsiders.

For now, Barmer represents a place split into two worlds—there are modern industries that seek to master nature to create enormous wealth and there’s a traditional economy that has submitted to nature for centuries. The locals need to wise up fast to the developments that can fundamentally transform their lives.

Is Surat losing its lustre?

They are on a (merit) roll