Home
Business Today
BACK OF THE BOOK
March 22, 2009
Story

Google retrofits a bus with VSAT equipment and computers and video screens to ride out the dusty country roads of semi-urban towns in Tamil Nadu in a journey aimed at making Internet a point of relevance in people’s lives rather than just a matter of interest. As its bus traverses through small towns to understand Internet illiteracy, Nitya Varadarajan shares the experience. D. Rama, a 48-year-old housewife from Vellore is thrilled as she listens to the voice-activated services of Google
When Prem Ramasami (27) informed his grandmother a few years ago that he had got a job with Google in the US, he had a tough time explaining what Google did and what the Internet was all about. “You aggregate information and disseminate it like a public librarian?’’ she asked. Despite India being recognised as an IT powerhouse, the bulk of semi-urban Indians are no better than Ramasami’s grandmother.

Google wanted to find out why. It retrofitted a bus with VSAT equipment and computers and video screens to ride out the dusty country roads of semi-urban towns in Tamil Nadu, in a journey aimed at making the Internet a point of relevance in people’s lives rather than just a matter of interest. Ramasami’s grandmother, the first among Internet illiterates to board the bus enjoyed the experience of sending an e-mail for the first time in her life, in the only language she knew, which was amil. 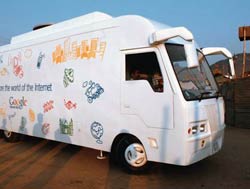 The Google Bus: Fitted with VSAT connectivity, video screens with speakers and Internet connection, the bus will be in Tamil Nadu for 45 days
The bus will ultimately cover 15 towns across Tamil Nadu in 45 days and show the people how the Internet can fulfill the information, education and entertainment needs of users. It began its journey of discovery on February 5 in Vellore, a Tier 2 town, 150 km from Chennai. The first and perhaps the largest problem that the Google team faced was of language. Tamil, along with Hindi, is the most widely used language on the Internet at 19 per cent and yet, regional language keyboards are scarce. This barrier was only circumvented in part by using the Indic language keyboard offered by several sites—but users had to reach them through the English language.

At the Voorhees Higher Secondary School in Vellore, boys from Tamil and English medium schools, showed curiosity and interest in the 5-10 minutes allotted for each batch. “We used Google maps to locate our school, houses and the nearby Golden Lakshmi temple,” said S. Vinod, a 9th standard student. Others were thrilled with the messenger services, the search results that threw up images of their favourite film stars and the inevitable cricket score. “How do we register for e-mail—can it be done in the local language?” was a common query. Lack of knowledge about technology and cost of Internet access were other obstacles that the Google team came to know of. S.

Gnanashekaran, a maths teacher at Voorhees, who had his first peek at Wikipedia and YouTube, said: “If the Internet helps to explain my subject better in the class, I would love to include it in the classroom.” Sadly, such technology is almost non-existent in rural India. A dip stick survey by BT revealed that 90 per cent of the 800 students who boarded the bus on February 5 did not know anything about the Internet.

The team also found that though cyber cafés charged low rates, cost was still an issue for those who used mobile phones— more for the free incoming calls—and investing in a home computer entailed a big sum. Parents were also not sure how their children could actually learn lessons better at a cyber café than through tuitions. Nevertheless, wherever the bus halted, middleaged men and women learnt what the “mouse” looked like and how to apply for jobs. A mother of two, D. Rama (48) said: “The Google Bus has made everything so simple. They don’t teach all this at cyber cafés.”

In Salem and Pollachi schools, Google had to use auditoriums to interact with the 5,000-strong audience comprising students, parents, teachers. “While everybody was shown a video explaining how to use the computer and browse for information, the quality of broadband connectivity and power cuts were major issues,’’ says Nishant Nair, Online Operations Representative at Google. A boy uses Google maps—to locate his school and the nearby Golden Lakshmi temple in Vellore
What made the guys at Google happiest, however, was the interest their mobile phone services generated in towns where broadband speed is less than average. “Voice enables us to reach non-users while still leveraging our core strength in search,” said Ram, adding that Google was committed to developing more products for this segment, after assessing user interest.

“We are keen to extend our mobile service offerings to all parts of India. Voice is going to play a big part in it,” says Ram. As the bus wound its way through Tamil Nadu’s heartland, Google gained further insight into issues surrounding Internet usage. But for many people who made it to the bus, life changed significantly. S. Anbarasu, an auto mechanic, realised that he could find technical information about two-wheelers on the web. Internet, he admitted, had arrived in his life. And, perhaps, in the lives of many others.