Home
Business Today
BACK OF THE BOOK
August 23, 2009
Story

The humble auto-rickshaw may soon be reborn as a fuel conserving, truly green vehicle, thanks to some smart engineering work by Dutch and Indian students. Nitya Varadarajan spends a day with the participants and organisers of project ‘Tuk-Tuk’ to find out more.

The humble Indian autorickshaw may soon be reborn in a smart, fuelconserving avatar. The trigger: A Dutch environmentalist called Stef van Dongen, who took a few too many rides in rickety, smoke belching three-wheelers on a trip to India. Shaken and stirred, he made it his mission to build a better, cleaner model of the auto-rickshaw for Indians.

And just two years after his “smoky” experience, students of four engineering institutes from The Netherlands, and three from India, are busy providing the final touches to their respective LPG or CNG injected auto-rickshaw designs, as part of an international competition. The contest was envisioned by Dongen, who is also Director of Enviu, a Netherlandsbased environment think-tank. 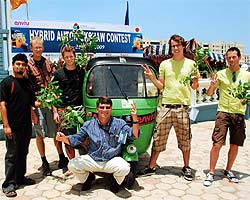 Once produced commercially, these will be India’s first true ecofriendly three-wheelers—at least 40 per cent more fuel-efficient and emitting 35 per cent less smoke than the “green” autos in use now.

Observing the students working at the “competition site” in Chennai, Dongen can’t stop talking about the rides that egged him on to create the award. “Some of the vehicles even ran on kerosene,” he says, throwing up his hands in despair during a conversation with BT.

After returning to The Netherlands, Dongen talked to and encouraged a select group of educational institutions in India and his home country, to see if they could come up with designs for a commercially viable but more eco-friendly vehicle. To lend excitement to the initiative, he proposed a competition to be held in India, complete with awards and prizes. As the seven teams battled it out under a hot July sun in Chennai to put the final touches to their dream machines, BT spent a day with them, asking questions and taking quick rides in the vehicles —only to come back rather impressed with the creativeengineering genius that these youngsters, far more mature than their 20-something years, had displayed.

The Winning Entries
The team from Han University, The Netherlands, that finished on top, designed an auto-rickshaw that allows direct injection of LPG to the engine. Ruben Antvelink, 25, a student of Applied Sciences at Han, who was part of the design team, said: “Fuel control (of LPG) was difficult. We had to see how it reacted with lube oil.” Antvelink provided for a spark plug inside the injector stream so that the fuel could burn inside out and leave no residue unlike in presentday autos. They are still trying to sort out a few worries, though. For instance, the fuel pump and the injectors used in the prototype cost 250 euros (Rs 17,067), which is too expensive for India. The team is now figuring out a way to bring it down to a more affordable level.

Yet, so practical was their model, that it impressed potential buyers. “The biggest problem with an LPG-powered auto-rickshaw is that it gives the same mileage as a petrol engine, even though it is admittedly more eco-friendly. A device that improved mileage was like an answer to a prayer,” said a potential buyer. No wonder, Wing Commander M.K. Gulati, Vice-President- LPG Systems, EG Gas, wants the prototype to be produced commercially. Gulati, who was there during the final rounds of the competition, said he figured the LPG model would add value to his gasdistribution company.

Another team that drew interest was the Hanze University crew who developed a direct injection kit for CNG/petrol, using an electronic- control unit (ECU). “The injection of the oil is very precise,” explained Harmensytze de Boer, a mechanicalengineering student. A small pump is used for the purpose. The main kit consists of two sensors—one for positioning the crankshaft and one for the throttle. The kit costs Rs 10,000. The team spent the last six months in India meeting clients and has already received proposals to take their business plan forward.

Even the Indian teams, which worked on four-stroke autos, unlike their foreign counterparts which focussed on two strokes, came up with brilliant concepts. The RV College of Engineering used the hydrolysis process for their vehicle. Ashwin Gopalakrishnan, 22, a mechanicalengineering student from RV, explained: “Petrol does not burn completely, leading to poisonous emissions. We used hydrolysis (electrolysis of water which leads to a split into hydrogen and oxygen) to check this. The hydrogen provides energy while oxygen makes the flame travel faster for a complete burn. It results in 20 per cent better fuel-efficiency, huge emissions reduction and even improved acceleration.”

The host institute, SRM, walked away with the first prize in this category and with a kit that doesn’t just reduce emission but also “traps” the CO2 salt that can subsequently be sold. Says Ankur Kumar, the team leader who has just passed out of SRM: “We spoke to auto mechanics and drivers and learnt that the maximum they could afford to pay for a kit was around Rs 5,000.” The team then devised a new kit for the engine to ensure efficient burning. They also designed a method to trap the CO2 salt (from the emission), which could be easily removed and sold. According to Kumar, 500 gm of CO2 salt costs as much as Rs 150. “By using our method, an auto-rickshaw can reduce emission levels by 55 per cent and yet improve mileage by 22-25 per cent. The kit will cost around Rs 5,750,” he says.

The Road Ahead
So, what’s next on the agenda for the teams? Will all the models or even one of them find a large buyer who will produce these three-wheelers on a mass scale? “In the next six months to a year, many of these technologies would be ready for commercialisation,” says Elmer Stroomer, Technical Manager at Enviu. For now, the teams are all working to fine-tune their models. And even though there was a winner and a runner-up team, all the designs met the emission standards and guidelines laid down by the judges. Says Mathijs Huis in ’t Veld, Manager for the project, interestingly named the “Tuk-Tuk” project (auto-rickshaws are known as Tuk-Tuk in Thailand): “We are giving equal importance to all the kits. Each kit maybe be suitable for a certain market segment—and in any case all ideas have to be encouraged.”

Adds Stroomer: “We estimate that there are five million autos in India with a majority of them running on two-stroke engines. If even one million of them adopt our kits, there would be a big impact on the environment.” Also, with the government regulations insisting that two-stroke autos upgrade to fourstrokes for better environmental impact, many two-stroke autos would get a new lease of life by incorporating these devices.

Up close with recession